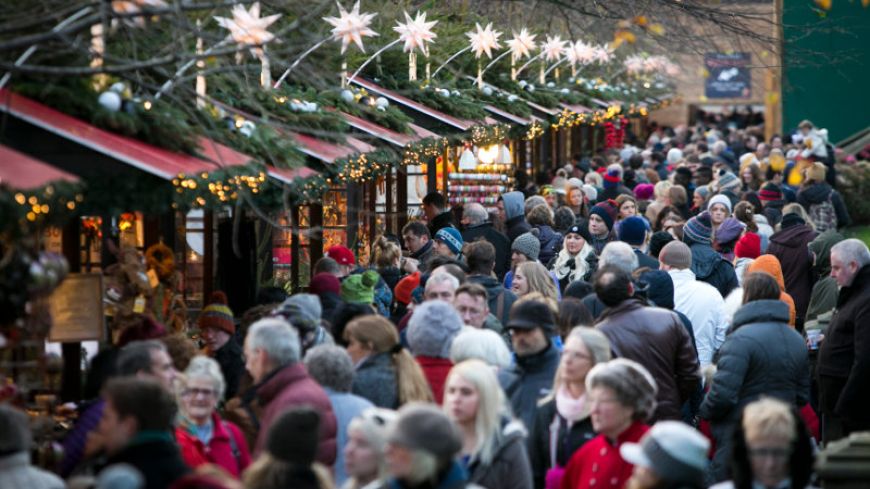 "Edinburgh's Christmas" is a package of Yuletide themed events, run on behalf of Edinburgh City Council. They run from the third week in November, through St Andrew's Day, to early January as the 3-day Edinburgh's Hogmanay festivities come to an end. Together with Burns Night at the end of January, these festivities are also known collectively as "Edinburgh's Winter Festivals".

Other Christmas events in the city include:

Edinburgh's Christmas was first launched at the turn of the millennium as "Edinburgh's Capital Christmas" (it dropped the "capital" in 2005 to become just Edinburgh's Christmas). Between 1999 and the pandemic, the festival encompassed a growing number of events, from Christmas Light Night to Edinburgh pantomimes and Christmas shows, fairground rides like the Big Wheel and Star Flyer, skating in the New Town, Santa's grotto, ever-expanding Christmas markets, and more.

Underbelly, who organised Edinburgh's Christmas from 2014 to 2021, reported that there were 943,000 unique visitors to Edinburgh’s Christmas by 2019. In that year, 12,000 people jammed onto the Royal Mile to see Santa riding a sleigh down a zipline to accompanying pyrotechnics and fake snow.

The flipside of this growth has been criticisms that the event had become too big, and placed a heavy toll on public gardens (causing long-lasting damage to trees and the lawn), and that it has stretched local services, and exacerbated the shortage of affordable housing. After Edinburgh's Christmas events were cancelled in 2020, the festival returned in 2021 in a similar form to previous years, but Underbelly's contract was not renewed in 2022.

Edinburgh's Christmas was due to be organised by a new event management company Angel's Event Experience, but is now being organised by UniqueAssembly after the contractor informed Edinburgh City Council it was unable to fulfill its three-year contract weeks before the 2022 festival was due to start. See story: Edinburgh’s Official Christmas Festival 2022 Rescued.

Edinburgh's Christmas is expected to be similar to the previous years in 2022, given UniqueAssembly has had a very short time-line to prepare the programme.

The festival gets under way with the switch-on of the Christmas lights on Edinburgh Christmas Light Night through the Old Town and New Town. Look up the Mound, for artist Hannah Ayre's cascading geometric snowflakes and the brightly lit giant Christmas tree from Norway which every year is erected beneath Assembly Hall.

A focal point of Edinburgh's Christmas activities is the ice rink (read review) in the George Street, between Castle Street and Charlotte Square, for a second year. This year, the rink will be covered for the first time. For more energetic skaters, it's worth noting that the larger Murrayfield Ice Arena is also back in business with 2 hour public skate sessions (compared to 40 minutes on George St) throughout the week.

A smaller Christmas Market returns to East Princes Street Gardens and on the Mound. The market doesn't include the huge deck on the lawn of East Princes Street Garden, which attracted so much controversy in previous years, but organiser UniqueAssembly say there will be around 70 stalls in the gardens and the Mound in 2022 featuring local and European merchants selling crafty and festive gifts, hot drinks, and food.

Rides here include the iconic Forth 1 Big Wheel that rises and falls beside the Scott Monument and several fairground rides.

The Christmas Market returns to East Princes Street Garden from 10am to 10pm most days. It's free to enter.

Meanwhile, Christmas-themed attractions for all the family can be found at Santa Land in West Princes Street Gardens, including Santa's Stories (naughty and nice children should book ahead), a Christmas Tree Maze and rides like Waltzers and bumper cars.

Previous years have included a Santa Train, reindeer merry-go-round, and various other family attractions. Tickets for the rides range in price.

How many Santas make Christmas? Well, there's no lack of portly, white-bearded chaps and, for that matter, ladies hitting the ground for the charity fund-raiser Edinburgh Santa Run.

Pantomime at the theatre is as traditional as mince pies around the tree at this time of year. Levity and fantasy are the order of the day, often with cross-dressing and updated, comical versions of traditional fairy tales.

Calculations for previous years are that over 200,000 individual bulbs light up Edinburgh’s Christmas, with over 10 kilometres of cabling.

To some extent Edinburgh's weather dictates the success of these Christmas events. If we're lucky the city is crispy chilled and dry. But it can be dreich, windy and wet.

Ticket prices vary for different attractions. Some are free, but for those that are paid, EH residents can claim a 20% reduction.

George Street is the new home to Edinburgh’s Christmas ice rink, Lidl on Ice, situated in the block between Castle Street and Charlotte Square. Skaters can also break from their skate for mulled wine, hot chocolate and food at rink-side seating areas. The rink is sponsored by German grocery giant Lidl in partnership with Edinburgh business association Essential Edinburgh.

This is the third location for Edinburgh's Christmas ice rinks. The first ice rink was the Winter Wonderland ice-rink in East Princes Street Gardens. It was a small circuit rink, prone to get wet from melt-water during mild winters, but still fun.

St Andrew Square hosted a mini "elliptical" ice rink allowing you to skate around the Melville monument. Business group Essential Edinburgh, who manage the Square, said it could no longer accommodate the ice rink due to the size and scale of the rink in 2019.

In 2016, organisers Underbelly introduced a tunnel of faerie lights installation called Street of Light at the George Street location. A similar installation can be found still at Christmas at the Botanics. In 2018, it returned with the addition of a silent street party called Silent Light, where participants could choose from three separate playlists and, listening on headphones, dance under the archways.