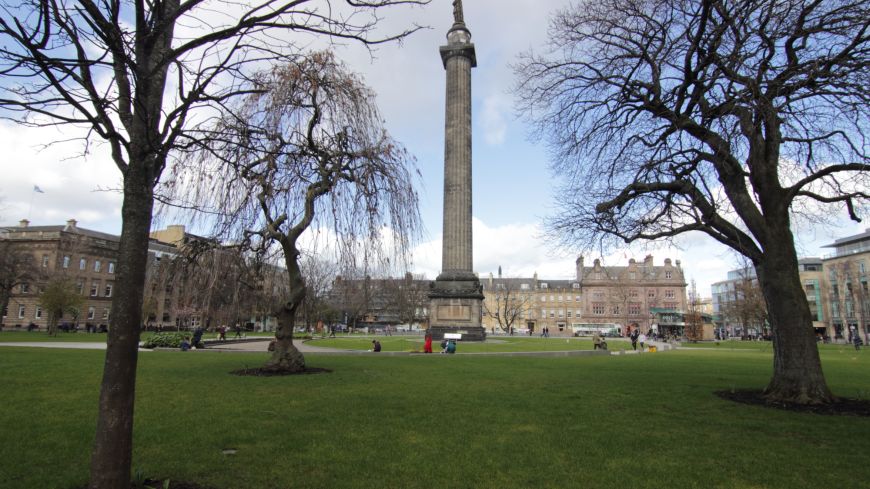 St Andrew Square is one of the most prestigious locations in Edinburgh New Town. A mirror of Charlotte Square, St Andrew Square is located at the East End of George Street in what was the hub of Edinburgh's financial world, but in an area that is now more characterised by its pubs, restaurants, and designer shops.

In the centre of the St Andrew Square is its public garden (also square-shaped) with a towering Roman column at its centre. This is the 41 foot tall Melville monument (built in memory of Henry Dundas, 1st Viscount Melville).

The Garden is operated by business marketing organisation Essential Edinburgh on behalf of the various private owners of the surrounding buildings.

The East end of the garden is dominated by the Dundas Mansion, acquired by the Royal Bank of Scotland in 1825 as its head office. Now one of the bank's main branches, this grand building, is fronted by a small semi-circular driveway and gated garden. Inside the main banking hall it has a lovely blue dome ceiling with multiple small gold star windows.

The square remains an important hub for the Edinburgh tram, intercity coaches and local buses.

Bus services use both the street and the new bus station. St Andrew Square bus station, which originally opened in 1957, with four stances, closed in 2000 for a £4m refurbishment.

A modern station with airport style passenger information screens, CCTVs, new toilets with baby change facilities, cafe and so on, opened in 2003. Pedestrian entrances to the bus station are at Elder Street and North St Andrew Street (at the north east corner of St Andrew Square).

St Andrew Square was originally designated as a main interchange for the new Edinburgh tram network, on the first phase of the line for which work started in 2008. It is now the terminus for the line from Edinburgh Airport.

Following a £2.6 million investment in the square, by the City of Edinburgh Council, in partnership with Scottish Enterprise Edinburgh and Lothian, the gardens re-opened on 4 April 2008 with two new entrance gates in the south-west and northeast corners, curved footpaths linking the new entrances, a reflective pool in the South West of the garden, mood lighting, and a small café pavilion. The Melville monument has also undergone repair.

The improvements were warmly welcomed by people in Edinburgh, particularly since unlike most New Town gardens that are restricted only to local residents, the revamped St Andrew Square garden is now open to the public.

However, businessman Sir Lawrence Dundas bought the land and built a Palladian town house on the spot - now owned by the Royal Bank of Scotland Group. St Andrew's Church was built part way along George Street instead.