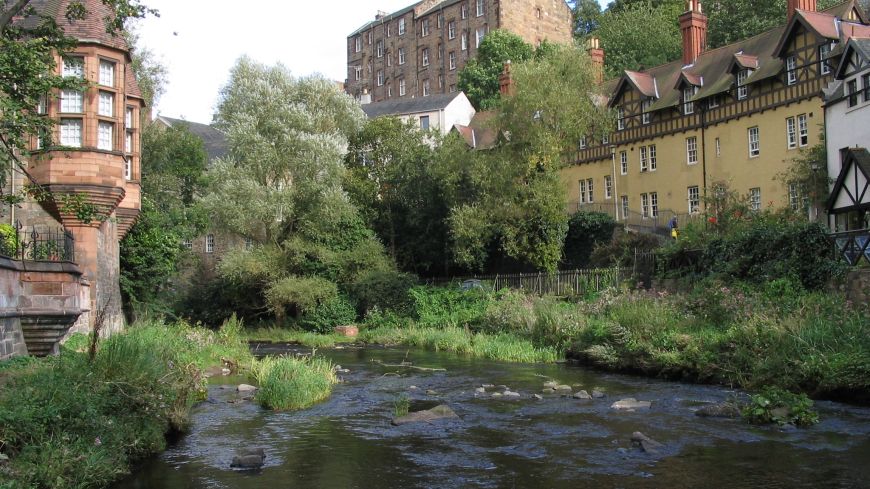 The Water of Leith is perhaps more a green corridor than a park, although it is designated an Urban Wildlife Site. The waterway snakes through the city from the foot of the Pentlands to Leith docks, providing a haven for birds (as much as 80 different species), wildlife, and a peaceful, semi-rural route for pedestrians, cyclists, joggers and pram-pushers. There's also a variety of historic sites that are linked with this important Edinburgh river.

You can walk (and cycle) much of the way with the water rushing below you, although the pedestrian-cyclepath doesn't always go directly beside the river and some access points have steep staircases to negotiate. Sections of the Water of Leith make attractive scenic routes for getting around the city, whether it's going to a restaurant or pub, a rugby match, or an art gallery.

In recent years there's been quite a bit of cleaning up of the Watter of Leith, although rubbish can still be a problem in parts. The Water of Leith Conservation Trust help maintain the City of Edinburgh's 12-mile Water of Leith walkway from Balerno to Leith.

Walking/cycling the Water of Leith

The walkway (and cycleway) is either beside or nearby the Water of Leith. It starts at the outlying village of Balerno at the foot of the Pentlands, and goes along the old Balerno Branch Railway line through the Edinburgh suburbs of Currie, Juniper Green and on to Colinton.

The route passes into the heart of the city passing under the Union Canal viaduct, skirting the Saughton Winter Gardens, and the sports fields at Murrayfield.

The landscape around the river has a surprising country feel to it as it passes Roseburn, opening into a kind of small, thicketed meadow. A small wooden bridge across the Water Of Leith leads to a wooden staircase up to the Scottish National Gallery of Modern Art.

The river arcs around with a rough path alongside it, as it passes near Haymarket, with a steep wooded slope to one side and studio type residences on the edge of the water to the other.

You can also exit here to Belford Road to walk up to the parkland settings of the two Scottish National Gallery Of Modern Art buildings (Modern One and Modern Two).

The path and river wrap around a hotel, passing under a small bridge via a metal walkway, and follows a twisty, narrow, woodland path to noisy waterfalls at the otherwise sleepy Dean Village.

You can take the high road or the low road through Dean Village: option one follows the footpath across a small pedestrian bridge up a windy, steep hill above the river, and alongside some residential houses. It comes out at a narrow, steep cobbled road, Bells Brae, which leads back down to the river.

Or, instead of crossing the bridge, you can pass through the gate along the cobbled road into Dean Village itself. There's an old mill building - the main road is called Miller Row - over an aged stone bridge, where you can look down and see the water as it passes underneath and down a waterfall on its way to Stockbridge.

This is perhaps one of the most popular stretches of the bicycle-walkway: it's very close to the city centre (a good shortcut for those Stockbridge or Botanic Gardens bound), the path is in excellent condition and of a good width, and the scenery with its rugged rock faces and mature trees is impressive.

As you descend the cobbled road in Dean Village, the river rushes under the colossal stone Bridge of Dean. A wide path takes you past various remnants from the area's mill days. The river is now fairly open and wide as it continues past St Bernard's Well, with tall woodland of Edinburgh's New Town residential private gardens climbing to both sides of the path.

At Stockbridge, the river bends South and runs parallel to the Royal Botanic Garden in the Inverleith area, passing along a pleasant leafy path behind the artisan row houses of the Stockbridge colonies.

At the Canonmills clocktower, in the middle of busy roundabout, it ducks under Inverleith Row, skirts the neglected Warriston cemetry, with its fallen, overgrown gravestones, and continues near the Leith-Canonmills bike path, a former railway line as evidenced by the old platforms, stone railway bridges, and tunnels. If not following the river you can connect with this route via the Rodney Street tunnel (see video) from the park at Scotland Yard to Tesco's supermarket.

Here the river passes through a mixture of redbrick and modern industrial and residential buildings, until it opens up at the river mouth at Leith Docks with its waterside pubs and restaurants.

Water of Leith on the map

On the map below, the Water of Leith is the blue line snaking from the North to the South West of Edinburgh. On the satellite view, it is more of a furry, snaking, green line. The arrow indicates the mouth of the Water of Leith.