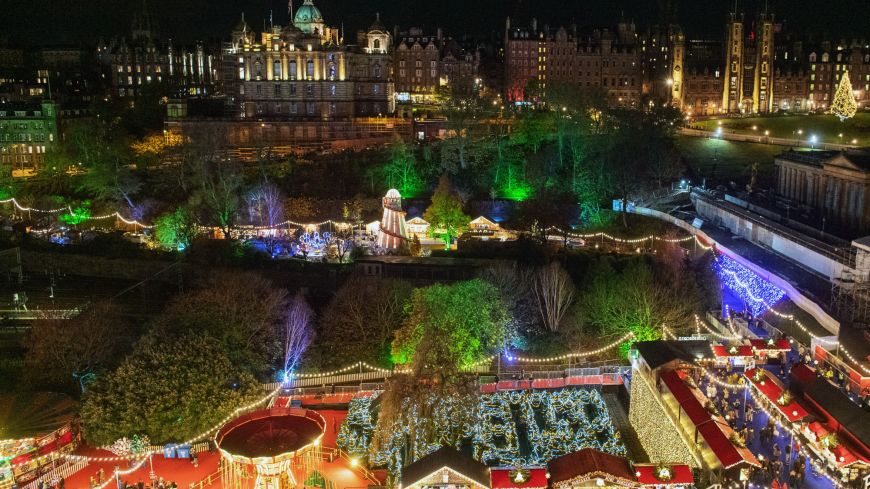 Over the years, Edinburgh's Christmas Market has varied in size and theme, from a German market to Scottish crafts, but the core part of the market are the stalls on the Mound Precinct and along the upper level of East Princes Street Garden, as far as Waverley Bridge.

The Christmas Market also has a number of rides, such as the Helter Skelter, an old-fashioned carousel, and the Big Wheel towering beside the Scott Monument.

In previous years, the Christmas Market has included a temporary ice rink, Winter Wonderland built out on top of the grass lawn area at the lowest level of the garden. The Christmas ice rink is now erected on George Street. Some of the family attractions like the Christmas Tree Maze, bumper cars, and Santa's Grotto can be found nearby at Santa Land, at the Lothian Road end of West Princes Street Garden.

The Christmas Market 2022 is due to return a week later than originally planned (25th November to 3rd January) after the contracted event organiser was unable to deliver on its contract. The Christmas Market area is likely to be limited to the upper level of the garden and outside the galleries on the Mound (same as 2021).

On opening day of Christmas Market 2021, long queues of people waited to enter the market at Waverley Bridge, testifying to the event's ongoing popularity.

In 2019, Edinburgh's Christmas organisers announced that they would extend the Christmas Market's footprint with more stalls on the south side of East Princes Street Garden.

Widespread concerns were voiced about the safety of the scaffolding erected to hold over 100,000 daily visitors.

Conservation groups spoke out against the growing footprint of the Christmas Market, covering the gardens both sides of the railway track, and poor oversight by the council. They have criticised the huge temporary site as being out of character for a World Heritage Site and, as the Cockburn Association puts it, the "creep of commercialisation in our public parks and places". The grass in the Garden took many months to recover after the Christmas Market, leading to calls for the market's attractions to be distributed to other, more suitable parts of the city.

The Christmas Market was cancelled in 2020 due to Covid-19 restrictions.