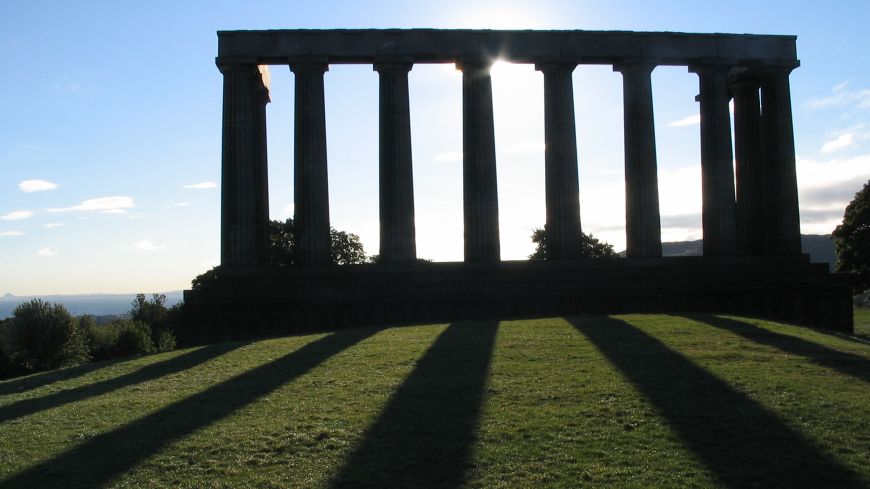 Calton Hill is an extinct volcano, set right in the city centre. It is one of Edinburgh's main hills, unmistakable from a distance with its Athenian acropolis poking above the skyline.

It is one of the oldest public parks in Britain, bought by Edinburgh Town Council in 1724, following development of the National Monument Project.

One of the park's most famous denizens, philosopher David Hume was a strong advocate for creating a place "for the health and amusement of the inhabitants". The wide footpath, opened in 1775, that climbs gradually to the top of Calton Hill is now named after him. Hume Walk has been called the first public footpath in Britain.

The acropolis structure that dominates the top of the hill is the unfinished National Monument of Scotland. Initiated in 1816, a year after Napoleon's defeat at Waterloo, the monument was meant to be a replica of the Parthenon in Athens, as a memorial to those who had died in the Napoleonic Wars.

Building began in 1822, but funds ran dry by 1829, and only a facade of the building was completed. It was dubbed "Edinburgh's shame", but it's now a popular landmark and it's a lot of fun crawling up and down its giant steps. Plans since to complete the building never really get much support.

The top of Calton hill is a usually quiet place to come on any day, with its grassy slopes and panoramic views of the city, including down the length of Princes street (the main shopping thoroughfare) and Edinburgh Castle. There is a good view North of the ruddy-coloured cliffs of Salisbury Crags, Arthur's Seat, and the undulating slopes of Holyrood Park.

Calton Hill is easily accessed. It takes about five minutes to get to the top of the hill from a staircase at Regent Road on the South side, Royal Terrace on the North side, or you can drive up and park. There is a path right round the edge of the hill and a jumble of historic buildings and structures on top including, for star gazers, an observatory. In fact, there are two observatories on Calton Hill: the Old Observatory House, designed by New Town architect James Craig in 1792; and the City Observatory, built in 1818, which has exhibitions and viewings of the night sky.

Within the four walls of the Observatory site, are exhibitions run by Collective Gallery, upmarket restaurant The Lookout, a kiosk serving snacks and drinks, and paid toilets.

Also of interest is Nelson's Monument (the British admiral who led his fleet to victory at Trafalgar in 1805), which has a famous timeball mechanism by which ships used to set their chronometres.

Calton Hill is still very much revered as a common ground to many Edinburghers. Attempts, in recent years, to create a theme park and railway up the hill have met with a chorus of protest, but Collective's reinvention of the Observatory complex has met with general praise, particularly by astronomers who had witnessed the site's decline and disrepair.

It has not taken away from Calton Hill's attraction: its volcanic rockbase, gorse-strewn hillface and windswept ruggedness. The area remains a rough gem.

In August, Calton Hill is a hub for Edinburgh festival shows. It offers excellent views of fireworks displays from the castle during Hogmanay and the grand finale of the Edinburgh Festival, the Festival Fireworks.

On the last day of April, Calton Hill is the scene of the Beltane Fire Festival. It has also hosted the Samhuinn Fire Festival at Halloween.