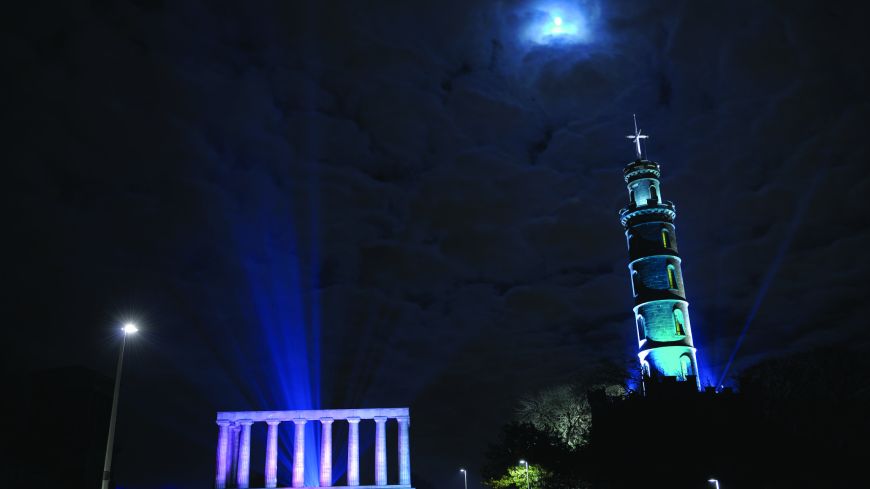 The Nelson Monument on Calton Hill was built between 1807 and 1816 to commemorate Admiral Horatio Nelson who died at the Battle of Trafalgar in 1805.

A tall tower in the shape of an upturned telescope, it sits atop the central hill. The monument, built by architect Robert Burn, offers some excellent panormas of the surrounding Edinburgh New Town and Old Town, and well beyond to the road and rail bridges on the Firth of Forth.

At 456 feet above sea level the Monument is highly visible from far off. This led to a 762kg time ball being added to the Monument in 1852 to enable captains of shipsmoored in the Firth of Forth to set their chronometers (time pieces or clocks) for accurate navigation by observing the dropping of the ball at one o'clock Greenwich Mean Time each day.

Nine years later the one o'clock gun at Edinburgh Castle was added, to give an audible signal.

The time ball, which used to drop at noon in the Winter months and 1pm in the Summer, came back into action after a £250,000 restoration in Spring 2009. It had not been operational for some years due to disrepair.

The time ball continues to drop at one o'clock, operated by an employee of Ritchie & Sons Clockmakers.

The museum on the ground floor has some related exhibitions, explaining the importance of the time ball for maritime navigation. There's also a display about the tactics Nelson used to gain victory at Trafalgar and a model of his ship, The Victory.

Admission to climb to the top of the tower is £6.00, but admission to the museum on the ground floor is free.