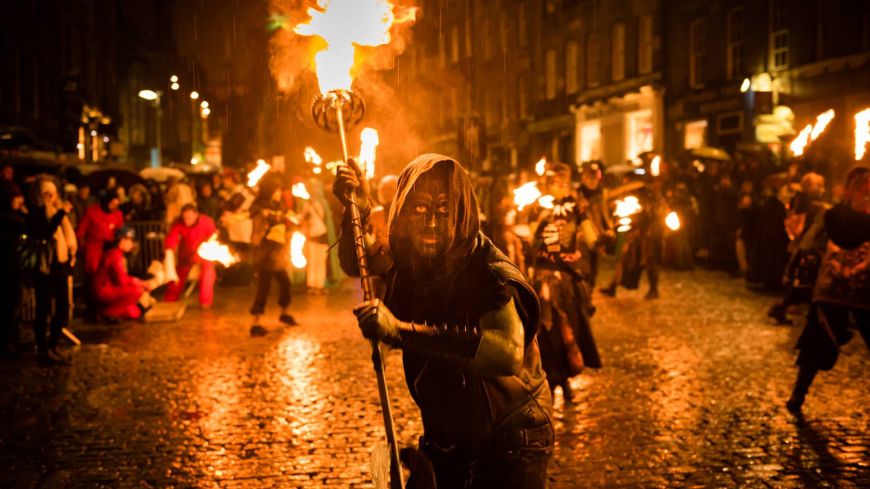 It's one of many fiery events that take place each year around Bonfire Night and Halloween.

Samhuinn is being held in Holyrood Park in 2022 with the promise of "more fire, acrobatics, drumming and otherworldy creatures than ever before".

You need to pre-register for the event. In 2022, the suggested donation is £5 (+ £0.78 booking fee): the Beltane Fire Society is a not-for-profit charity, operating on funding from donations and tickets.

Samhuinn Fire Festival is a modern re-imagining of an ancient Celtic festival marking the end of summer and rise of winter. The modern event has been held in Edinburgh since 1995. Its spring and summer counterpart, Beltane, takes place on Calton Hill on the last day of April each year, and has been running since 1988.

The venue for Samhuinn Fire Festival was originally Edinburgh's Royal Mile, but in 2018 and 2019, the Samhuinn Festival was held on Calton Hill to accommodate more folk. With more space to expand into, the volunteer-driven Beltane Fire Society scaled up its unique Halloween night celebration with a familiar mix of neo-pagan theatre, pulsating drums, fire-dancing, acrobatics, over 20 stage performances, and a large bonfire.

The event introduced a fee in 2018, with discounts for a limited number of low-income tickets. In previous years it was a free event.

The Samhuinn 2019 ritual climaxed with a struggle between Summer and Winter Kings and the unveiling of the mysterious Cailleach, before lighting the bonfire as a symbol of renewal and turning to face the oncoming colder months.

Samhuinn 2020 was held online, due to pandemic restrictions.

The following year saw the return of the live Samhuinn event, although the parade route through Edinburgh's Old Town was only disclosed once you had registered.

In 2022, Samhuinn moves to Holyrood Park, with details of the night's activities released to those who have pre-registered.

Free registration, but suggested donation is £5 per ticket (+ £0.78 booking fee).

The Beltane Fire Society describes Samhuinn as "A night where the veil that splits both worlds grows thinner, a night where spirits can touch the souls of the living. A night to reflect on the year gone by and to look forward to the one to come."

Central to the drama is the Summer King who leads a carnival of summer's last dance, with nymphs and sylphs, fire performers, and jesters. He is reluctant to draw his short season to a close. But now he must pass the mantle to the Winter King, who is accompanied by various characters such as drummers, hunters, and wolves.

The Cailleach, a crone queen of winter, is also at hand to ensure the passing of the seasons.

Samhuinn (Samhain) for ancient Celts was the time of the year to bring the cattle in from summer pastures to lowland fields for protection. Considering the signs of approaching winter, the trees were bare and the land was barren. Nature itself seemed to be dying.

Outside it is dark for most of the day and the weather is harsh and unrelenting. Black energy grips the land and life struggles to survive in small sanctuaries.

Samhuinn is also the time when the rising of the Seven Sisters (Pleiades) proclaims the triumph of darkness over light. Many ancient cultures celebrated this changeover time from the old cycle to the new. It is believed that peoples as diverse as the Polynesians, ancient Egyptians and Greeks looked to the dawn sky for rising of Pleiades marking the end of the old year."

BFS events are a unique opportunity in today's fragmented Society for the whole community of Edinburgh to join in a celebration of the country's ancient heritage. The Beltane Fire Society is managed by a voluntary committee, and all the performers are volunteers.

The process of developing the events each year has also proven to be a valuable catalyst for community development. All the performers are voluntary, and many are previously inexperienced in performance skills. They either join by word of mouth or by attending one of the advertised open meetings held early in the year. Under the guidance of professional performers and community artists, the volunteers are trained in the technical aspects of event production, prop construction, in character performance techniques, team building, percussion skills and the safety considerations of outdoor events.

Many of the participants have since gone on to develop careers in community education and performance art as a result of their experiences with Beltane.