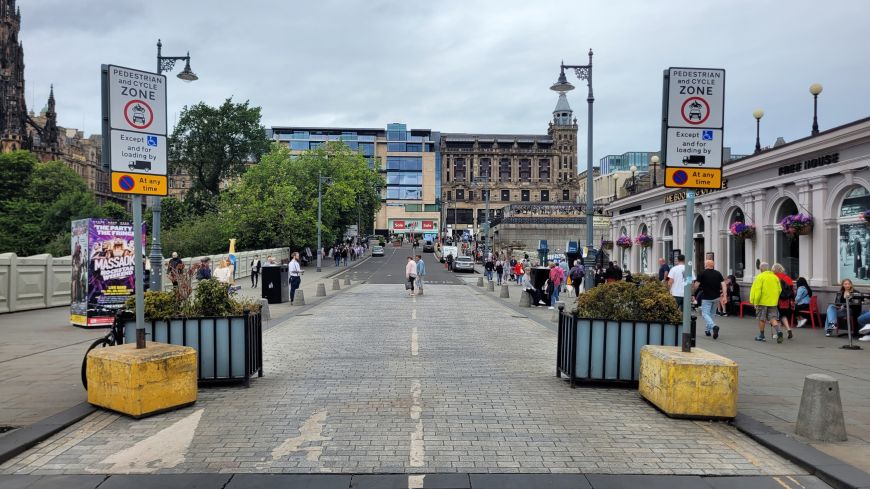 For many arriving in Edinburgh by train, Waverley Bridge is the first place they step foot when leaving Waverley Station. The bridge has one of the four main entrances to Waverley railway station, with roads descending into the station itself - the North and South ramps. Since 2016, the Waverley Bridge entrance is used mostly by travellers on foot and a few, select vehicles.

The bridge is located right in the heart of Edinburgh, a pedestrian and cycle thoroughfare that connects Edinburgh's Georgian New Town with the medieval Old Town, across the valley of the former Nor' Loch.

Located at the East end of East Princes Street Garden, it has fine views of the Scott Monument and the garden, and it forms part of the roof of Waverley Station, with views of trains running along railway lines below the bridge.

Waverley Bridge is one of three main routes linking Edinburgh's Old and New towns. The category A listed bridge was built between 1894 and 1896 by Blyth and Westland. The other nearby routes between Old and New Towns are The Mound to the West of Waverley and North Bridge, at the East End of Princes Street.

In June 2020, as part of emergency traffic measures brought in during the pandemic, to encourage people to social distance, walk, roll, and cycle, the Council ordered the closure of Waverley Bridge at the Princes Street junction with Waverley Bridge "and a point 40 metres or thereby south of the south kerbline of Princes Street". There is restricted access for vehicles from the Market Street end and tour buses that once clogged the bridge have relocated.

The Edinburgh City Centre Transportation Plan (2019) envisaged Waverley Bridge as a "new world-class space and gateway to the city" that makes better use of the iconic view from the bridge with "a less visually intrusive bridge parapet", more events, and possibly an information centre or cycle hub.

The closure of Waverley Bridge to cars and buses has also improved the flow of bus traffic along Princes Street. Previously the junction was a congestion hotspot at peak periods.