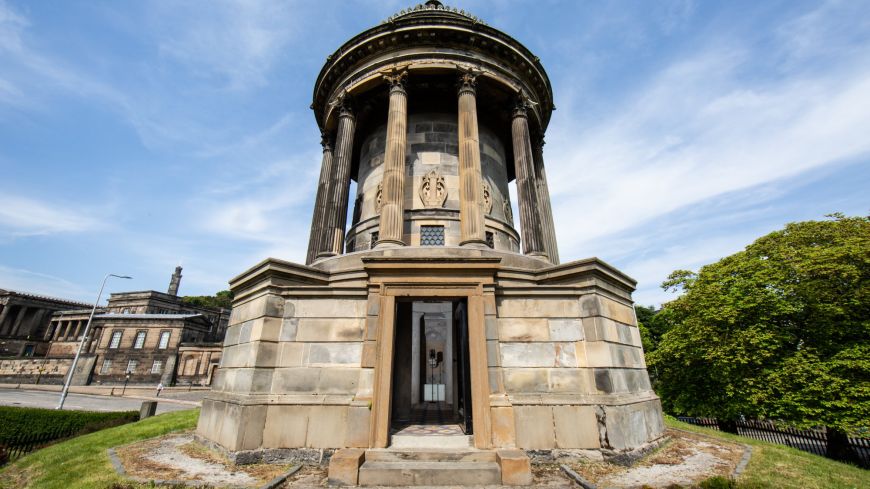 Re-opened in 2009 following extensive restoration work, this is more than a monument, it's a small, circular temple in the Neo-Greek style typical of Georgian era Edinburgh, constructed in honour of Scotland's national bard Robert Burns (1759 to 1796).

The Burns monument is on Regent Road at the Southerly foot of Calton Hill looking out to Arthur's seat in Holyrood Park (not to be confused with the Burns Monument Centre in Kay Park, Kilmarnock, Ayrshire).

The foundation stone of the Edinburgh Burns Monument was laid in 1831. It was designed by Thomas Hamilton, who was also responsible for the Royal High School just across the road.

The Burns Monument is the setting for Emeka Ogboh’s audio installation Song of the Union, as part of the Edinburgh Art Festival in 2021.

The idea to erect a monument to Burns was first proposed by Mr. John Forbes Mitchell in Bombay in 1812 and expatriates raised a subscription. However the idea was not taken up at home until 1819, when a meeting at the Free Mason's Tavern in London, noblemen and gentlemen - admirers of the Bard - formed a committee under the chairmanship of the Duke of Atholl.

Thomas Hamilton, the architect was appointed as he had already designed the Burns Monument at Alloway in 1820 and the nearby Royal High School, Edinburgh. He did not charge for the design work.

The temple consists of a central drum structure called a 'cella', surrounded by twelve columns known as a 'peristyle'. The monument, built in Ravelston sandstone, is capped with a domed roof, with intricate stone carvings and winged lion sculptures.

The monument overlooks the Canongate graveyard, which is the final resting place of the poet's close friend, Mrs Agnes MacLehose, referred to by Burns in his letters and poems as 'Clarinda'.

The interior decoration and surrounding planting of laurels, hollies and Ayrshire roses were also donated by Mr. Robert Buchan, house painter and Mr. Eagle Henderson, nurseryman. The foundation stone of the monument was laid on the 8th of September 1831. The Subscribers Committee looked after the monument until 1839, when it was handed over to the current owner, the City of Edinburgh.

It was suggested at the time of the handover that the internal statue (designed by John Flaxman R.A. in 1824) should be moved as soot from the gasworks below was affecting the marble.

A fundraising appeal was launched for the restoration of monuments on Calton Hill in 2008, attracting donations from private individuals, business and charitable trusts topping £200,000. Although repairs had been carried out in the past, the monument's exposed position meant that a comprehensive £300,000 restoration programme was needed, including the replacement of some of the ornate stone carvings and the removal of asphalt from the roof.

A ceremony marking the opening of the restored monument was held on 6 September 2009.

The Burns Monument is located on Regent Road, not far from the East end of Princes Street. Calton Hill rises above it.