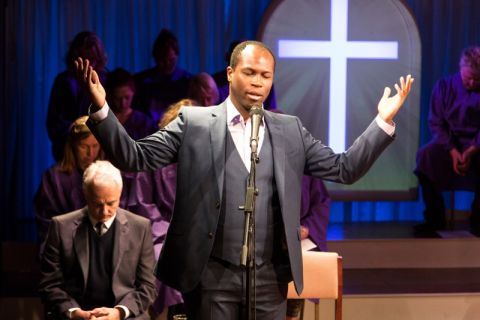 It’s not often you get a full gospel choir on stage at the Traverse, but there is one as ‘The Christians’ opens. They’re there to celebrate that the church led by Pastor Paul (William Gaminara) has finally paid off the costs of its expansion.

It’s quickly apparent that this is a house divided against itself, however, almost as soon as Paul reveals he no longer believes in hell (at least not in any physical sense). Hardly a radical position these days, one might have thought, but enough for his Associate Pastor, Joshua, (Stefan Adegbola) (the name choices are clearly not random) to resign from the congregation and take a number of other church members with him.

It might sound like a storm in a communion chalice did not ‘The Christians’ raise the debate beyond any four walls and into areas of theology and its inevitable link to more human issues of personalities and their politics.

It’s largely through Paul’s dialogues with them that the many concerns and levels of this play become apparent; not merely the nature or existence of hell but also the diversity of beliefs and needs contained in any spiritual gathering.

This is a play in which belief is but one element amongst several; hubris vanity and self-deception are all suggested as motives, and the unease of the congregation, it is apparent, have all-too-human bases.

Whether or not you are a person of faith, ‘The Christians’ raises questions that are likely to stay with you long after seeing this production.