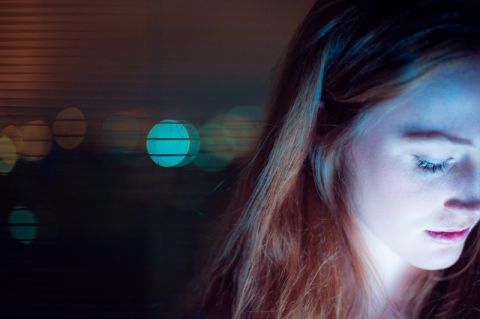 Sitting in the plush, gilded and chandeliered interior of the Royal Lyceum Theatre, a bevelled double mirror on stage is like a giant, distorting looking glass, reflecting a section of the audience and setting the tone for the questions about to be posed: Where are you? Who are you? What you are doing? Why are you doing it?

The analogy is of Lewis Carroll’s Alice in Wonderland, where a young girl follows a rabbit down a burrow to a strange and disturbing underworld where perceptions and proportions are turned upside down.

Jenny Hulse captures the dichotomy of calculating vulnerability as Wonderland’s character, Alice, who is seen to be apparently voluntarily entering the as yet unknown world of pornography.

Like the giant Alice of Carroll’s tale with legs protruding from a tiny house, this Alice says she is trapped in a small space and is appealing for help, but the question is whether she is compliant in this capture or whether she has been coerced.  As the performance unfolds, this question of whether actions are those of pretence or honesty is ever present.

The screen that creates a stage within a stage is a metaphor for the computer screen that most of us face daily for one reason or another and that can lead into the ostensibly private world of dangerous games.

The silent domestic scenes that are played out behind this stage screen show the veneer of innocence and normality in what can become a double life that shifts between the domestic and degradation.  Someone who convinces himself that he is ‘normal and healthy’, as Alice’s father John is told by what looks like his alter ego, Michael, he can enter this sordid world of video sex where vile acts are done to someone else’s daughter.

The piece was technically striking with eerie sounds and a highly effective forest scene appearing from nowhere like the darkest of fairy tales, but it lost pace some way in and felt weak and protracted at bits in spite of the initial shocking and explicit impact. The cast were literally exposed because of the subject matter that pushed the limits of theatre as limits are pushed in an industry where the word ‘no’ is itself a ‘no’.

This is a disturbing subject to put on stage and there were some audience members who walked out.  Pornography itself is too mainstream to be regarded as taboo but the question of who is controlling who may be. Like the looking glass, only some things, not the whole story, can be reflected but Wonderland casts some light on the dark and damaging murky world of sex and death and the consequences of stepping beyond what seems to be an easily pushed door. Wonderland is not a comfortable watch but the piece carries a powerful message.

The stated running time of 2 hours was not accurate and the performance ended within 90 minutes.