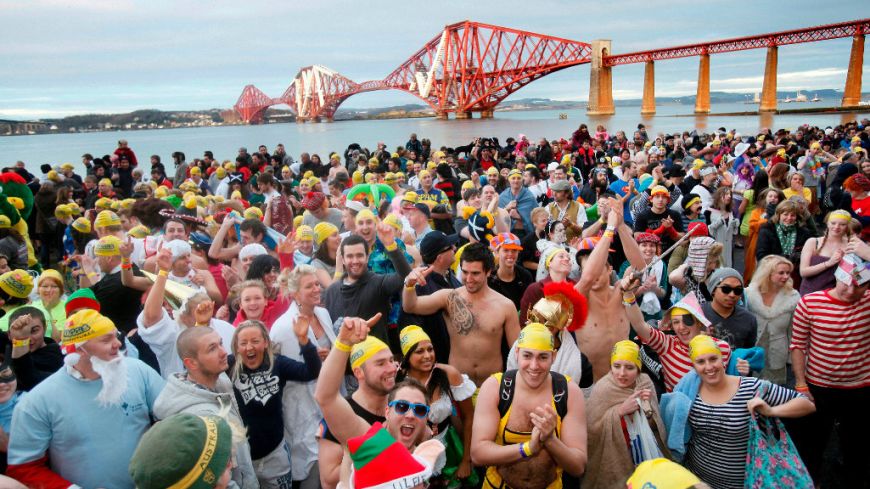 The Loony Dook takes place on the first day of each new year in South Queensferry, on the Firth of Forth. The Loony Dook is not returning as an official Edinburgh's Hogmanay event in 2023. It had been a New Year's day fixture in the Hogmanay festival programme since 2010, but as the ticket price rose each year, it came under increasingly intense criticism for being too commercialised.

The last Loony Dook organised by Edinburgh's Hogmanay took place in 2020. It was cancelled in 2021 and 2022 due to the pandemic (although some people still dooked independently), and new Edinburgh's Hogmanay organisers UniqueAssembly announced it was being dropped from the Hogmanay programme in 2023. A programme of free music, First Footin', is being planned in Edinburgh at the same time.

Regular South Queensferry dookers have announced their intention to take to the water on the afternoon of 1st January, 2023.

What is the Loony Dook?

The best way to describe it is a masochistic New Year's day ritual. Up to 1,100 brave people dress up in fancy dress and throw themselves into the freezing cold water of the Firth of Forth at South Queensferry, just a few miles out of the Scottish capital. With the skirl of bagpipes urging them on, the crowd of humanity makes a mad dash into the watter and (most of them) quickly retreat back to the bar. Some stay in much longer - up to half an hour.

When the dook takes place varies from year to year depending on the tides, but it is held on the first day of the year around the middle of the day.

In 2010, organisers of Edinburgh's Hogmanay began charging a fee to take part in the Loony Dook, leading to growing popularity of the free Portobello Loony Dook.

The popularity of the Loony Dook on New Year's Day has spread, with similar Loony Dook events taking place along the length of the 55-mile coastline of the Firth of Forth.

Dookers in 2023 will meet at noon on the Boathouse Steps, half an hour before the dook at 12.30pm.

The Loony Dook takes place around High Tide. In the past, participating in the event required registration, and the Dook itself took place following a check-in and a Dookers' parade through the town. The best fancy dress costume was awarded a small prize and the honour of being the best Loony Dooker.

Spectators are welcome to cheer on participants in the annual communal exercise in masochism down on the beach at South Queensferry.

The Loony Dook is no longer an official Edinburgh's Hogmanay event. This information is for historical record only.

£1 from every ticket bought is donated to the RNLI, the charity that saves lives at sea.

Lothian Country runs buses to and from South Queensferry. Dalmeny train station is also relatively near to the event and around 20 minutes from Waverley Station and 15 minutes from Haymarket Station.

The Loony Dook was the brainchild of a group of friends after a few beers in the Moorings Lounge bar. The friends thought that it would be a good cure for their hangovers to take a jump in the sea off South Queensferry on New Year's Day.

The event took place on New Year's Day in 1986, and continued as an annual tradition through the eighties. Its popularity really took off after it was filmed by the BBC during the millennium Hogmanay celebrations. With the organisers struggling to cope with the growth of the event, which had topped 1,000 dookers, it became part of the official Edinburgh's Hogmanay programme in 2010.

Pete Irvine, the director of Unique Events, who ran Edinburgh's Hogmanay for Edinburgh City Council, said the Loony Dook would become a "flagship event" in the winter festival.

Unique Events introduced an admission fee for the 2011 Loony Dook which, with an additional £1 booking fee, amounted to £6. The admission fee rose £1 a year to £10 for the Loony Dook in 2016.

From 2016, the ticket price included a £1 donation to the Royal National Lifeboat Institution, and went towards policing and safety measures.

After taking over the running of the three-day Hogmanay festival, Underbelly increased the admission fee to £11 in 2018 and then £12 in 2019.

The Loony Dook was officially cancelled in 2021 and 2022 due to pandemic restrictions (although a few hard core dookers still took the plunge). In 2022, the full Hogmanay programme was cancelled, just days before it was due to happen, due to Covid-19 restrictions.

The wheel had come full circle. After Unique Events had originally adopted the Loony Dook as "a flagship event" in the official Edinburgh's Hogmanay programme in 2010, it quietly announced around a month-and-a-half before 1 January 2023:

"There is no official Loony Dook taking place as part of the Edinburgh’s Hogmanay programme this year, but locals and visitors can enjoy community dips and dooks taking place in surrounding areas."