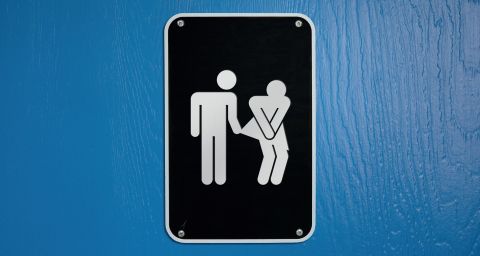 A recording of the actual voice of Donald Trump using the sexual words that he described as merely ‘Locker Room Talk’ opens this shocking and challenging work from Gary McNair.

Reacting to these words, McNair recorded, over a period of four weeks, interviews with groups of men and boys from, as he describes, ‘office blocks to tower blocks, from the doctor’s surgery to the dance floor’, where they were invited to talk about women. All those involved knew they were being recorded, that their words would be used as part of a play, and were promised anonymity.

The result is Locker Room Talk, a piece of theatre whose text is relayed via headphones and delivered verbatim by a cast of four women in real time.

Director Orla O’Loughlin sets the tone of subversion as she introduces the proceedings in the role of Gary McNair, before the cast of strong women stand on the bare stage in front of mics to deliver the text. Amid snorting laughter, each adopts male stances as they capture an array of voices ranging from Irish, English, US, Australian, as well as Scottish.

Sexist language may not be a total shock to women but the full spectrum exposed here is nothing short of terrifying. The play is divided in to several categories and among them is a catalogue of deep misogyny, brutality, violence, hatred and, scarily, laughter. Within these stark revelations shines barely a pinprick of any sense of decency.

Sorority can be a tenuous thing but this show makes it look like deep-seated misogyny is the thread that binds unspoken male fraternity.

McNair acknowledges the difficulty of being an outsider among male peers; about the hypocrisy involved of being included in an uncomfortable joke.

The post-show discussion, led by psychologist Dr Nina Burrows, revealed the fear that would have been experienced by women in the audience had these words been read by men. The de-humanising language, distanced in the mouth of a woman, would have been terrifying with stark awareness of the depth of misogyny present in some of our fellow human beings.

Locker Room Talk doesn’t give answers but opens an important forum to questions to make people ask, as McNair himself has, ‘why we think it’s okay.’

McNair has shone a light in the murky corners of a male world where words are spoken by men who wouldn’t want their daughter/sister/wife/girlfriend to hear them. As one voice describes it, the ‘walking irony’ of being a man.

Locker Room Talk played as a Work in Progress in the Traverse in February, at the Abbey Theatre, Dublin with an Irish cast in May and at the Latitude Festival in July, the first time the Traverse has shown work at either venue, before returning for a three-performance event on Monday 21 August.