Made in Dagenham, Greenside, Review 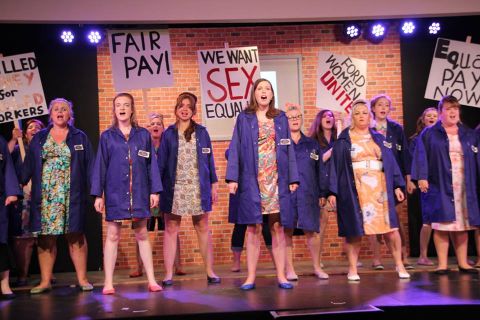 The only way was Essex, even back in the sixties when the women of Ford Dagenham not only took on the American conglomerate but also the prejudices of men in the management, on the factory floor, and even in their own homes.

Some may feel that in nearly 50 years things have not improved all that much, but without these women immortalised in this show, it could be a lot worse.

In a small venue the strength of the singing, coupled with the indignation of the women is more powerful than if the show was in a large theatre.

Viva is a community arts group and the cast draws on a range of ages to fill the roles as they were meant to be.

The actor who plays Harold Wilson is particularly credible with the mannerisms of the former Prime Minister well honed. The writing is not that kind to Harold, but the part is played for comedy and it works.

There are a lot of strong performances from the large cast and not a weak link in sight. Without a programme, I can only go by the parts as I remember them: Rita O'Grady as the leader of the strike is transformed from nervous machinist to firebrand and the actor captures that beautifully. Her husband has a good singing voice and the couple play off each other very well.

Employment and Productivity Secretary Barbara Castle (who introduced proposals In Place of Strife to reduce union power) while visually closer to Theresa May is also very good. Monty as the union leader committed to procedure captures the dinosaur on route to personal salvation. Beryl, the foul mouthed machinist was so good she began to annoy you, as she is as rooted in the past as the men. The young newcomer did particularly well with her solo.

The show holds your interest and the women gain your support, but I would not rush out to buy the soundtrack. The show lacks songs that you would remember and there seems to be a missing stage in the escalation of the dispute. 'Made in Dagenham' is a historical piece and an enjoyable show.