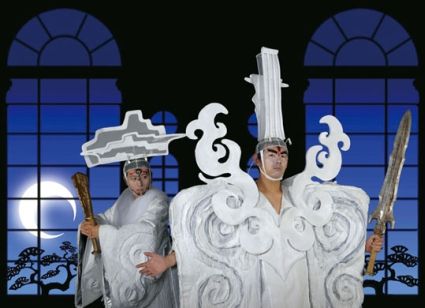 An e-ticket for this show appeared magically in my email inbox.  Strange, I hadn't ordered it - was my fate being decided in some cyberspace dream world?

Who was I, poor mortal, to argue? And so I took my seat in the opulent, high-vaulted space of the McEwan Hall for a production that is a marriage of the unadorned spoken word of Shakespeare and traditional Chinese total theatre - mixing elements of dance, mime, swordplay, farce, acrobatics and music. Billed as a multimedia performance I was surprised at the absence of screens in the staging, but I had under estimated the cutting edge technology employed in this site-specific show.

It has been argued that it is the breaking down of identities that leads to Titania and Oberon's brawl, which drives the rest of the story.  So it's appropriate that as the show starts they are wearing virtual reality headsets to engage in a fight as characters in a computer game.

Many attempts to harness high-tech equipment in theatre have been less than successful - something that seems to be wilfully played with as the court of Theseus and the four lovers skilfully stutter, rewind and fast forward their way onto the stage.  It's a recurring technique, which can also be seen as questioning who controls their fate as they loop through their actions.

Much of the dialogue is in Mandarin, but the dramatic action of the familiar story is generally easy to follow - from the clowning rude mechanicals, to a street-wise puck dispensing a "love-in-idleness" virus, a digital donkey and a final choreographed battle for real love with clashing swords and swishing fighting-staffs.

The use of games technology to project backdrops makes conventional scenery seem redundant.  The high wall behind the stage is painted with light to form moving moonlit "willow pattern" landscapes, fantastical animals, Matrix-like screens or woodblock prints, and finally to bring the building itself to life.

The production is so tightly directed and delivered that it appears that even the live performances might have been recorded and played back. The narrative does suffer from the dichotomy of the styles and the bilingual nature, but in terms of presenting a visual spectacular and a unique theatrical experience, it is hugely successful.  I have to check my ticket to confirm that it was a Fringe and not an International Festival production.

I return, blinking, into the daylight - was it a digital dream?  Have I slumbered here while these visions did appear?