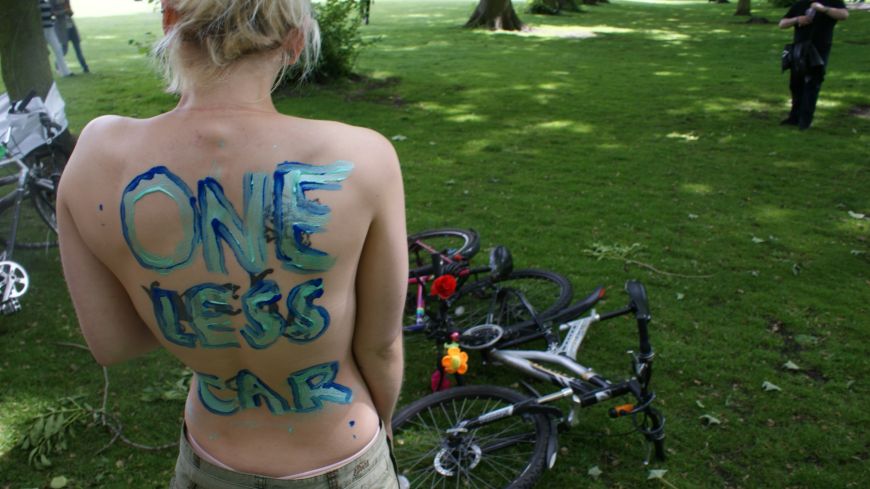 The annual World Naked Bike Ride in Edinburgh starts at Middle Meadow Walk in The Meadows. Cyclists will be stripping off, donning strategically placed fig leaves, paint, thongs, and tape on their naked bods, and hitting the road en masse.

The World Naked Bike Ride takes place each year in around 70 cities in 20 countries. The ride is a fun and peaceful protest against car culture and to highlight the vulnerability of cyclists on city roads in a light-hearted way.

The full ride will last about 3 hours.

According to the global web site: "We face automobile traffic with our naked bodies as the best way of defending our dignity and exposing the unique dangers faced by cyclists and pedestrians as well as the negative consequences we all face due to dependence on oil, and other forms of non-renewable energy".

The defininition of what constitutes "indecency" according to Scottish Law has changed over the years.

In the past, Lothian and Borders police have said that visible sexual organs constitute an offence and if a member of the public is "offended or alarmed" by the cyclists state of undress that too will constitute an offence. (See our YouTube videos with participants on a previous WNBR Edinburgh ride.)

That line of interpretation seems to have softened. The WNBR Edinburgh wiki page says this:

"We are also assured by Edinburgh Police that from 2021, their control will be made aware of the guidance that being naked in public is legal. However don't do anything to harass, alarm or distress people, and nothing you wouldn't do clothed. Anything other than going about your normal, legal, business (Like protesting whilst riding your bike.) could be seen as harassing, alarming, or distressing people, and that could be illegal. Play nice."

"Bare what you dare"

Legal issues aside, cyclists are encouraged to wear as little clothing as they feel comfortable with. "Nudity is not mandatory," advises the Wiki, "minimalist fancy dress is OK!"