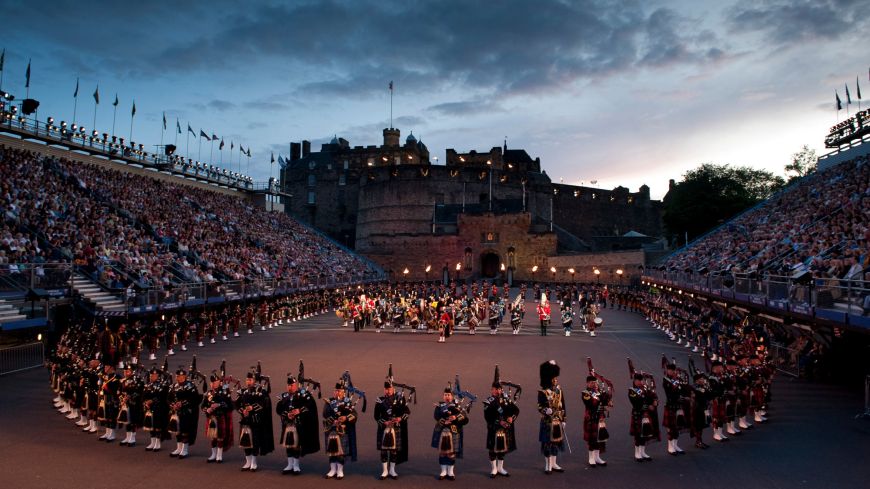 For scale, no show in Edinburgh can rival the Royal Edinburgh Military Tattoo. Literally hundreds of performers, both from Scotland and bands and outfits from abroad, gather under the dramatic backdrop of Edinburgh Castle.

The series of displays, which take place on the castle esplanade (an 18th century parade ground), combines traditional military ingredients and modern lighting and sound elements that you'd expect on a big stage arena. The key ingredients are pipes and drums, breathtaking shows of military precision, military bands, traditional dancers, and a lone piper playing from the castle battlements.

The "ultimate crowd-pleaser", as former Edinburgh Lord Provost George Grubb called the Tattoo, often sells out each year, long before its Summer performances, with armies of people coming to Edinburgh by bus and coach each night during the Festival.

The Tattoo takes place daily (except Sunday) during its August run, with the fireworks finale punctuating the city evenings.

The Royal Air Force has been confirmed as the lead service.

As always the Massed Pipes and Drums will be an essential component (expect The Royal Regiment of Scotland and the Bands of His Majesty's Royal Marines), along with the Tattoo Pipes and Drums and Tattoo Dancers. As well as a major home contingent, Stories will continue to celebrate the history and heritage of Scotland's global family over the course of the 100-minute programme, but will incorporate its new ethos of greater innovation and creativity that it calls "Performance in a New Light".

The Tattoo traditionally draws to a close with the lone piper playing from the castle ramparts and the massed pipes and drums rallying on the parade ground, before marching off down the High Street.

Find out how the Tattoo has changed: read EG's Review of "Voices" - the Royal Edinburgh Military's 2022 show

This sometimes catches people unaware. The nightly Tattoo fireworks can be heard around Edinburgh during August, especially the weekend fireworks. If you are staying in central Edinburgh, you'll known them when you hear them.

The Tattoo show incorporates a short fireworks display, usually near the end of the show (weather permitting).

In 2022, an "enhanced"  fireworks display took place at the performances on Friday starting at around 9pm (9.30pm on Friday 25 August) and Saturday 9.30pm (TBC for 2023). The Fireworks are later in those shows which typically have a 100-minute duration.

Flyovers take place at several Tattoo shows and will be announced in 2023. With the Royal Air Force confirmed as the lead service, this may be a special element in the show.

These were the dates of the flyovers for the 2022 Tattoo:

The first 50,000 Standard and Premier tickets sold are available at 2022 prices with the booking fee waived.

Prices for seats alone at Tattoo 2022 prices range from £30 to £180 (prices depend on seat location, day of the week). There are also more expensive hospitality packages (costing £hundreds) available.

The bulk of the seating, on either side of the main body of the arena, give a good view of the performances on the esplanade, and are £60 (£65 Fri/Sat) at 2022 prices.

Seats that face Edinburgh Castle, giving you that classic Tattoo backdrop, with the massed pipes and bands marching with the castle behind them, cost more.

The most expensive seats are in the Royal Gallery itself, the covered box on the east side of the arena. These prime seats, directly opposite the castle, are elevated above the performance, without being too far away. They range from £150 to £680 (£640 at 2022 prices). Many of these seats are part and parcel of Tattoo hospitality packages, including 3-course dining, post-performance reception, for corporate clients and special guests.

Not only is the castle the backdrop to the show from the East side, there’s a clear view the length of the esplanade to where the performers march in and out of the castle gate.

Due to the rectangular shape of the Esplanade stage, the troops of Tattoo participants will tend to direct themselves toward the Royal Gallery as they strut their stuff, particularly for ceremonial aspects of the show, such as the taking of the salute by the guest of honour in the Royal Gallery.

Premier seats below the Royal Gallery on the East Stand start at £160 (2022 prices), while seats on the corners on the east side of the arena start at £85 (2022 prices) depending on location and view.

The Edinburgh Tattoo introduced a £16 million pound new grand stand in 2011. The new stand has 8,700 seats, with a third more space per seat than the former grand stand, which had been in commission since 1972.

Tattoo 2023 tickets went on sale on 22 August 2022. You can buy tickets online from the Edinburgh Tattoo Office.

N.B. Half-price Tattoo tickets for the preview show on Thursday 3 August (tbc - when the media are recording the performance), typically go on sale around a month before the first show. The show is exactly the same as performed on other nights, with the exception that press photographers and television cameras are among some of the performers recording the show.

Dressing for the Edinburgh Military Tattoo

Remember this is Scotland and cool weather and/or rainstorms are not uncommon even in the middle of summer so check the weather forecast in advance and dress accordingly. The outdoor arena on the castle esplanade is exposed to the elements.

Covid-19 and the Edinburgh Tattoo

The year 2020 would have been the 70th Anniversary of the Tattoo. The show was dubbed "The Platinum Edition", and would celebrate the Tattoo's "enduring ability to link the Armed Forces with society and bring people together to celebrate the cultures and heritage of allies and friends".

It was due to commemorate the rich maritime heritage of the Royal Navy and tie into Scotland’s Year of Coasts and Waters. The Royal Navy, known as the Senior Service for being the eldest of the British Armed Forces, was lined up to be the lead for 2020.

Of course, due to Covid-19, it was cancelled.

A year later, the conditions were still not ripe for such a large capacity event, even though restrictions had eased significantly.

The Tattoo announced: “Despite the sense of optimism around the UK’s emergence from the Pandemic and our huge enthusiasm to stage a performance this year, it is now clear that the financial risks we confront in delivering The Royal Edinburgh Military Tattoo, at scale, on the Castle Esplanade in August are simply too great."