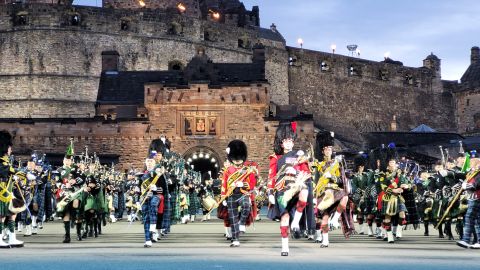 After the Royal Edinburgh Military Tattoo was cancelled in 2020 and again in 2021 due to the pandemic, there must have been some nervous moments leading up to this year’s event especially given the cancellation of that other banner show in the city in August, the Edinburgh International Festival Fireworks Concert.

This year also marks a much-heralded change in artistic direction for the Tattoo, with incoming Creative Director Michael Braithwaite jazzing up the traditional recipe with some new ingredients, and changes in pace and tone of the show.

So expectations in the 8,700 capacity, sold-out arena were high. As daylight dimmed, the braziers on the castle’s ramparts began to burn a little brighter. Pockets of stragglers, some nursing plastic beakers of beer, were still shuffling into their seats when Tattoo CEO Buster Howes welcomed the top brass arriving to take their seats in the Royal Box. What appeared to be a rogue busker in a kilt emerged on the parade ground thumping out a beat on an old, plastic bucket.

The crowd gamely clapped along with him. When Howes, in tartan trews and dinner jacket, joined a security official in trying to shoo the apparent arena-invader away, the crowd booed, and cheered on the drummer when he evaded them. Of course, it was all part of the script. Soon a female drummer in full regimental garb appeared at the opposite stand, then a bunch of regimental drummers emerged under the castle, all pounding out the same beat in unison, with the terraces clapping on enthusiastically.

This “pre-show” element, with even the Tattoo boss playing a bit part as panto villain, reflects a generally lighter touch to this new show. In many ways, “Voices” is the traditional Tattoo show, but it’s a more effervescent and fluid experience. It takes the classic tattoo formula and injects pizazz and many creative flourishes. More has been invested in lighting, costumes, and generally upping production values as a whole and it shows.

The Tattoo still has the massed pipe bands, brass bands, a troop of Scottish country dancers, fireworks from the castle ramparts, and the lone piper playing from the battlements near the close.

Tattoo favourites The Top Secret Drum Corps are back again drumming with incredible speed, synchronicity, and a sense of fun. Similarly, raw military precision is on display from the United States Air Force Honor Guard Drill Team, in a faultless display that involves tossing and spinning rifles to, and precariously close to each other. With bayonets fixed.

Alongside these traditional military elements are the cultural innovations. A blow-out display of colour in a Mexican Day of the Dead act features a mariachi band in a sea of swirling skirts, ponchos, and large, fluttering monarch butterfly wings. On this balmy August night, with vivid Day of the Dead animations projected onto the castle facade, it was a true fiesta of Latin exuberance.

Moving closer to home, a high-energy electro bagpipes and dance movement was reminiscent of Shooglenifty’s acid croft. Voices also gives a prominent role to three female vocalists, the Highland Divas, singing slower, Celtic-themed tunes, which gave the crowd an excuse to slow-wave their phones above their heads.

Some Tattoo elements are notable for their absence (at least, since my last visit to the Tattoo several years ago): there’s no battle re-enactment, or teams racing cannons over obstacle courses (a personal favourite when I was a kid). Ironically, in the year that the show’s title is called "Voices", there is no narrator’s voice over the loud speakers storifying the performers and performance, or welcoming people in fine Scots brogue from around the world. Some may miss that, although it would get in the way of what is a largely music-based show and its absence allows everything to flow more easily from one act to the next.

The “voices” of the title refers less to spoken word, than a more general cultural expression through music and dance by the 800-strong cast. The opening fanfare and signature tune Voices is a slow-burn, inspirational chorus, performed by the 46-strong Erksine Stewart’s Melville Schools’ Choir, to the accompaniment of the Royal Regiment of Scotland Band and the Tattoo band.

It’s followed by the appearance, through the smokey drawbridge, of the pipes and drums. The crowd roared. This is what many had probably come to see above all and as the historic parade ground fills up with so many different outfits marching and playing as one, you can feel the hairs stand up on the back of your neck.

Then a change of pace and tone again as the US Army Field Band bound onto the tarmac, brass blasting the instantly recognisable opening bars of the Seven Nation Army by the White Stripes. Whipping up the crowd, the band proceeded to rock through a medley of songs that swung from big band brass to rap, from Nikki Vianni’s poppy Mambo to a spot-on version of the Andrew’s Sisters Boogie Woogie Bugle Boy.

Regimental bands have always done popular music, but here it felt like they were really letting their hair down. Later in the show, the New Zealand Army Band performed a second fast-moving medley of classic tunes, from Dad’s Army theme Colonel Bogey to Tom Jones’ Dalila. One of the band-members was rocking out on electric guitar as they moved through The Rocky Horror Show’s Time Warp and Robbie William’s Let Me Entertain You. The band leader was having a blast, rapping, twirling his baton, and then led a haka directed at the Royal Box.

The all-female Tattoo dancers, a troupe of 48, performed an uptempo set that was an energetic play on traditional Scottish dance with a rich musical accompaniment from combined ceilidh and pipe bands. A nice touch was the way at one point, in mid-dance, they suddenly flipped their kilts from one coloured tartan to another.

Later, in the middle of the pulsating electro pipes and fiddles rave sequence, the dancers rushed back onto the parade ground. This time wearing short white dungarees, with plaid shirts tied around their waists, they performed all manner of high energy, freestyle dance moves based on Scots country dance, but also ballet, can can, Charleson, shuffling, and general leaping around. The one male dancer was the drummer who we saw at the beginning of the show.

"Voices" doesn’t have a particular narrative from one act to the next, but it has variety, scale, and a feel-good factor. As the performers massed on the parade ground for the atmospheric finale, the overarching theme of the show was revisited in projections on the castle walls: faces from different cultures and the words “together” and “connection” writ bright and large. The rousing voices of the Divas and the chorus of pipes hung in the smoke-filled air, while  fireworks exploded above the castle.

What the audience made of the fairly nebulous message is difficult to tell. But there was no doubt about the appreciation for the performance, the crowd clapping and cheering from beginning to the rousing end where the massed pipes and drums marched out of the arena and off down the Royal Mile playing Scotland the Brave.

Running Order (and duration of scene)

The Royal Edinburgh Military Tattoo continues til the 27th August. Book tickets at the official site. More Tattoo coverage and info on EdinburghGuide.com.