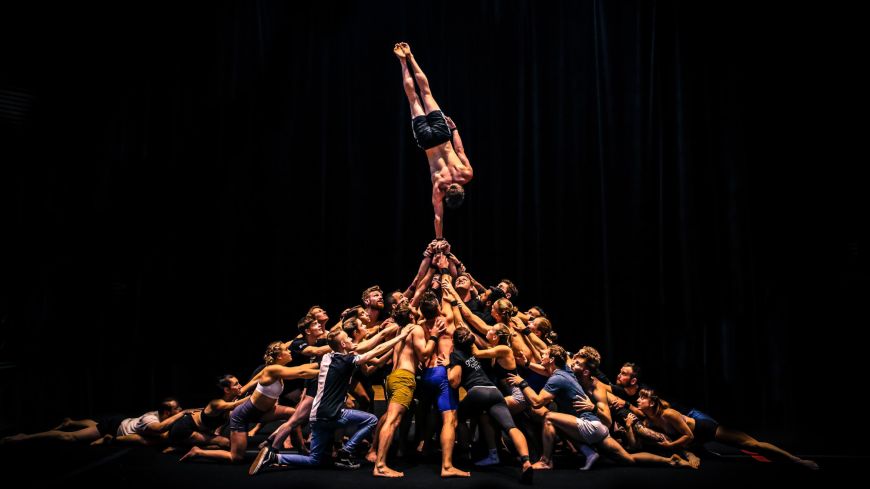 The Edinburgh International Festival marks its 75th anniversary with a return to Edinburgh’s theatres and concert halls at a scale not seen since 2019.

Where last year the pandemic restrictions meant the EIF revolved around three (socially distanced) marquee venues, Edinburgh International Festival 2022 will see 14 venues host 87 events and over 160 performances from over 2,300 artists.

The opening, free event is back. This year's show MACRO at BT Murrayfield on Friday 5th August, should set the tone for this year's festival with a music and light show from Australian contemporary circus trope Gravity & Other Myths, First Nations dance company Djuki Mala, the National Youth Choir of Scotland and Celtic musicians Aidan O’Rourke (fiddle), Kathleen MacInnes (vocals) and Brìghde Chaimbeul (pipes). Details for MACRO, which is free but ticketed, will be announced on 27 June.

This will be Fergus Linehan’s final year as Festival Director, before Nicola Benedetti takes up the role in October 2022.

Notably, this year’s Festival pilots a number of artistic residencies as part of an ongoing effort to make the Festival more sustainable by reducing the amount of travel required.

Highlights of the EIF 2022 programme include:

Internationaal Theater Amsterdam in residence at the Festival with two epic shows from the company’s repertoire – the UK premiere of A Little Life based on the novel by Hanya Yanagihara and an adaptation of Thomas Mann’s novel The Magic Mountain. These sit alongside a new adaptation of Édouard Louis’ The End of Eddy by Toneelschuur Producties.

As part of the UK/Australia Season there's a record number of Australian artists at this year's EIF. Performances include the Australian World Orchestra conducted by Zubin Mehta; Gravity & Other Myths in MACRO and The Pulse; the European premiere of You Know We Belong Together by Julia Hales; a tale of Sri Lanka post-independence and Australia as an immigrant nation in S. Shakthidharan’s Counting and Cracking; didgeridoo player William Barton with the Chineke! Chamber Ensemble; and violist Brett Dean performs alongside the Hebrides Ensemble.

There's a new production of Dvořák’s best-loved opera, the dark fairy tale Rusalka, featuring Welsh soprano Natalya Romaniw in the title role. The performance is also conducted by Douglas Boyd, Artistic Director of Garsington Opera and performed with one of the 2022 International Festival resident orchestras, the Philharmonia Orchestra.

The world premiere of Scottish Ballet’s Coppélia, is reinvented for the digital age by UK choreographers Jess and Morgs with a blend of location and real-time filming, projection and live performance. The original Delibes score is reimagined as part of a new composition by Mikael Karlsson and Michael P. Atkinson, performed live by the Scottish Ballet Orchestra.

The contemporary dance programme features Akram Khan’s new Jungle Book Reimagined which reinvents the journey of Mowgli through the eyes of a climate refugee; the UK premiere of Kyle Abraham’s An Untitled Love set to the music of R&B legend D’Angelo; and Aakash Odedra Company’s Samsara, which draws from Western, Indian and Chinese dance traditions.

A season of contemporary theatre, dance, visual art, film and conversation, under the banner Refuge has been created in collaboration with the Scottish Refugee Council to explore themes of refugeehood, migration, identity and inclusion.

As part of UNBOXED: Creativity in the UK, Dreamachine creates an immersive experience using light and sound to explore the potential of the human mind. It takes place at Murrayfield Ice Rink. Created by Collective Act, it brings together Turner Prize-winning artists Assemble, Grammy and Mercury nominated composer Jon Hopkins, and a team of leading technologists, scientists and philosophers.

“2022 is a special year for the Festival,” said EIF artistic director Fergus Linehan. “We hope that it will mark a turning point in the pandemic that has changed all our lives over the past two years. It is our 75th Anniversary and an opportunity to pay tribute to our first Artistic Director, Rudolph Bing, a refugee of war in Europe. And it is my final year as Festival Director as we hand the reigns over to a new generation. Edinburgh is more than a collection of performances, it is the great annual meeting point for artists and all those who love music, theatre, dance, and literature. We hope you will join us as once again for this unmissable celebration.”

Supported by global investment brand abrdn, the Festival's At Home digital programme in 2022 will feature behind-the-scenes interviews, exclusive music sessions and performances filmed in iconic locations around Edinburgh. Full details will be announced in the summer.

Booking for the 2022 Edinburgh International Festival opens to the general public on Friday 8 April. Friends of the EIF can book from today.