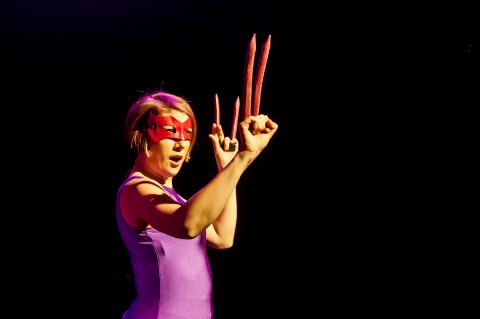 This comedy musical focuses on the life of ordinary office worker Bryony Buckle who, with the help of a big, scary syringe and a blast of lightning, is transformed into Vulvarine: the saviour of womankind. Complete with meninist arch-enemy The Mansplainer and love interest/ dude in distress Orson Bloom, this production flips the tired tropes on their heads and plays out-with the gender norm.

The first moments are dazzling and disorientating as the audience adjusts to the burst of energy and colour. It’s hard to keep up with the performers break-neck speed, but, once adjusted, the talent on show is truly mind-blowing. It is easy to forget the impressive cast is composed of only five as they whirl around the stage, slipping in and out of costumes and accents effortlessly, performing songs so catchy you’ll find yourself singing them in the shower the next morning. In particular, Steffan Rizzi gives a beautiful rendition of "Boys will be Boys", bringing a surprising depth to Sonya’s complicated character.

Robyn Grant, as always, gives a hilarious performance and has, again, created a vibrant piece that challenges the darkness in our culture with light-hearted comedy and charm. The story is bursting full of jokes and remains suspenseful till the end, even making room for a second instalment.

Fat Rascal Theatre’s talent will soon find itself on the West End; until that day get yourselves to the front row.  This feminist musical which doesn’t take itself too seriously deserves a bigger audience.