Under the Floorboards, PQA Venues, Review 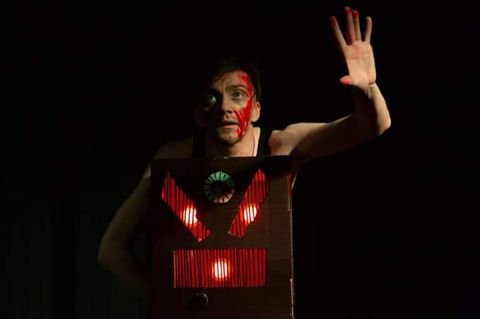 Under The Floorboards is an insight into the disturbing life of misfit Ed. This young virgin plays with dead bodies and still hears his mother’s bible-bashing from beyond the grave. The character is based on the infamously gory Ed Gein, who inspired many classic horror flicks. These references are clear in Simon Shaw’s production, complete with Leather Face masks and Buffalo Bill's tuck and pose. Although some key aspects of Gein’s case, such as the killing of Mary Hogen and Beatrice Worden are included, this is not a comprehensive biography. There is no mention of his brother, his farm-work or his friend and fellow gravedigger Gus.

Shaw is terribly convincing. His rigid physicality and painful slaps go above and beyond for the role. With simple makeup trickery, his eyes seem huge, bulging above hollowed cheeks. In the intimate staging, there is nowhere to hide, and Shaw has no hesitation in making us deeply uncomfortable. Although there are no published recordings of Gein's voice, Shaw's interpretation is a high pitched, childish, American twang and wheezing laugh. At points it comes across more like a Tim Burton character than something truly unsettling. His mother’s voice, which warbles out of a cardboard radio, is similar in its over-exaggerated cartoonish style, which becomes quite irritating.

The use of props, a flashing bar sign, skeleton head puppets and bizarre, yet captivating, papier-mâché eye balls, has great attention to detail but perhaps excessive. So much is squeezed into this short performance that it’s almost over-whelming. A stripped-back version would have been more powerful, allowing the horror moments time to breathe and build. As Hitchcock would say, ‘The more left to the imagination, the more the excitement.’

During such a controversial time for women in America, this could have been a great opportunity to explore the psyche behind the growing ‘Incel’ movement, but this production doesn’t offer any answers. Although a lot of effort has been put into this show, Ed is unfortunately just another creepy character, for creepy’s sake.