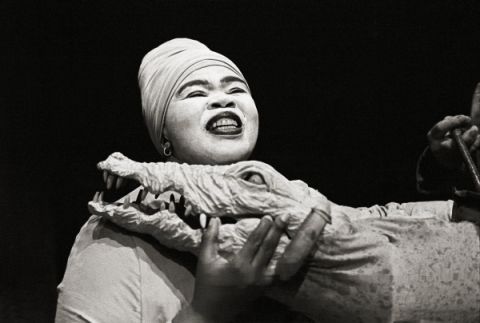 As the title suggests this multimedia production centres around the Truth and Reconciliation Commission, a court-like restorative justice body, which was set up in 1996 as a means of reconciling a nation to the cruelty black South Africans were subjected to during Apartheid years.

Ubu is a fictitious character who embodies the personality of a white South African agent responsible for countless gruesome deaths but at the end of Apartheid his conscience persists in haunting him. (“I will have to live with this until the day I die.”)

Pa and Ma Ubu are the only human characters in the play but three types of puppets are used to great effect. There is a vulture (who remains static), Brutus – a three headed dog who accompanies Ubu on his night time killing sprees and Niles, a crocodile who is Ma Ubu’s handbag and who digests Ubu’s evidence of his heinous acts. The puppets were manipulated and acted superbly by Gabriel Marchand, Mongi Mthombeni and Mandiseli Maseti.

The production was directed by William Kentridge who is renowned for his unique multimedia productions which incorporate his animated charcoal outlined work. In Ubu and the Truth Commission a huge screen was erected at the back of the stage and periodically a selection of images illustrated, with such simplicity, the horrendous brutality meted out against black South Africans.

The production incorporates flashbacks both from Ubu, and the corpses he was responsible for, and testimonials of parents who had witnessed their child’s horrific death. Puppets were parents who narrated their story in their own language which was translated into English by an interpreter. There was a volume of testimonies but the writer Jane Taylor, who is well versed in the art of puppetry, chose to isolate a selection of parent’s stories which created a profound effect.

Dawid Minnaar portrayed Ubu. Dressed only in basic clothes - a vest and pants – he excellently imbued Ubu’s inner turmoil which fluctuated from fawning to desperation in case the world and his wife discovered the true extent of his involvement. Busi Zokufa was the flamboyant wife constantly irritated by her husband’s nocturnal escapades mistakenly assuming he was having affairs.
It was a gripping script and an excellent multimedia dramatization of a time in South Africa’s life which was painful for so many.