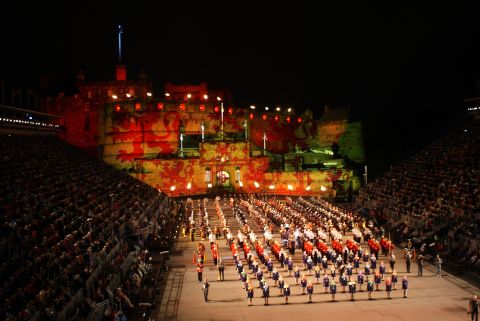 There are some things that you can rely on with the Edinburgh Tattoo: marching bands, fireworks and big bangs, mass country dancing, and displays of military manoeuvres. A lone piper will play a plaintive lament from the ramparts of Edinburgh Castle towards the end of the show, making the hairs on 9000 necks stand to attention, before the rousing grand finale of mass pipes and drums playing together. Running to 27 August, it's the biggest cast in the festival city, set against one of the most spectacular settings in Edinburgh, if not the country.

Even someone not steeped in knowledge of military bands must admit it's an impressive spectacle and the winning formula keeps people coming back for more.

While the basic formula is the same, each year the Tattoo re-mixes the ingredients. Over the years it's probably changed quite significantly. I saw the show on preview night that, although tickets were half price, has the downside that the press photographers and television are recording the show that night.

It's clear the creative directors have been given licence to strike out in new artistic directions in their arrangements and interpretations of this year's theme The Sea.

In one piece, marking the Scottish fishing industry, dancers wearing fairly non-descript, brightly coloured outfits, rather than traditional highland dress, are rounded up into nets by fishermen in yellow oilskins. Dancers from the West Ulster Total Dance Company combine with Highland dancers to provide an Irish flavoured sequences of movement.

The battle re-enactment – another standard element in the Tattoo programme – this year involves Royal Navy's Counter Piracy Patrol rescuing hostages from a bunch of pirates modelled on Jack Sparrow (humour is worked into the show throughout). It didn't work altogether, partly because, even with the show's ever-present narrator commentating the action, the press photographers were milling around amongst the performers. It was difficult to pick out who was who – at least from our distant vantage point below the royal box. A helicopter projected onto the wall of the castle was an effective touch though.

For much but not all of the show, a succession of images and patterns are projected onto the castle walls, to create the optical illusion of a different building, falling rain, the sea, or a familar pattern. Towards the end, the castle is draped in a Lion Rampant flag and then the Saltire.

Musically the arrangements and the performances are first class. The pipes and drums were on fine form, from the moment the Royal Scots Dragoon Guards burst through a cloud of smoke from the castle portal, at the start, to the rousing strains of Scotland the Brave late in the show with the crowd clapping along.

It's often surprising how widespread the bagpipes have been adopted throughout the world. This year's international component was represented by the curiously mixed brass, pipes, and drums of the Brazilian Marine Corps. A bright red block performed a variety of sophisticated, wheeling, marching manoeuvres, spelling out “TATTOO” and forming the shape of an anchor. The instruments sounded slightly off-tune, no doubt due to the fact that they had not yet had a chance to acclimatise to the cooler, wetter Scottish climate.

The pipers of the Royal Gurkha Rifles dressed in their tartan trews, were also well received by the crowd. There are also pipers from Germany, Australia, and Oman this year.

An element of comedy was provided early on by a Dutch Bicycle Band, from the Royal Netherlands Army Mounted Regiments. Dressed in World War 1 uniforms and riding clunky, old bikes – several quite precariously – they circled the Esplanade playing their instruments. When the Nederlanders  returned later, in contemporary uniform, they performed an excellent sea themed arrangement which included snatches of Somewhere Over the Rainbow and the Jaws theme.

The men and women of the German Mountain Army Band also gave a playful performance of traditional Bavarian themed music, with thigh-slapping men in lederhosen, playing huge alpine horns, and even chopping wood in time to the music.

This year, there was a notable absence of a stunt or precision drill act of past Tattoos – like whirling gun formations or motorcycle display team. However, the drummers from the Royal Marines gave a brilliantly synchronised drum display, to roars of approval from the crowd. It was the highlight of a varied set, which was played impeccably.

The crowd also got into the competitive spirit as two white-vested teams from the Royal Navy Field Gun team hauled heavy cannons up and down the Esplanade at full tilt.

Last but not least, this year sees the introduction of the £16 million, Aberdeen-built amphitheatre on the Castle Esplanade. The 8,800 capacity is no increase on the 36 year old stand it has replaced, but the seats are more roomy and have better sightlines, thanks to the horseshoe shape of the new arena.

You'll still benefit from a cushion though, and warm, waterproof dress as protection from the elements. Because there's one thing that you can't rely on with the Tattoo: Edinburgh's weather.

The Edinburgh Military Tattoo runs to the 27 August, 2011