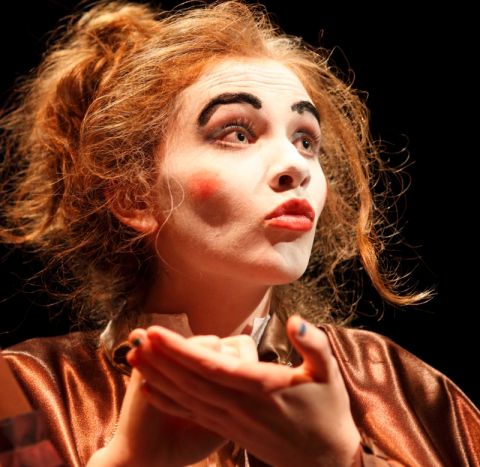 Nikolai Gogol’s short story written in 1835 has been brilliantly interpreted by the well established Newbury Youth Theatre. The strange tale is about a mesmerising portrait with the disturbing eyes bought by Chartkov, an impoverished Russian artist, and the impact the purchase has on his life in this ‘futureless’ town where it’s ‘always yesterday’.

The portrait is of a mysterious usurer whose debtors’ fates have been full of madness, murder, squalor and suicide. The story reveals the history of the portrait, the artist behind it and the effect having painted it had on his life and his family.

On a small and very crowded stage, the seventeen (yes, seventeen!) young actors appear tapping, squeezing, tinkling, rattling, and knocking on old broken instruments the sound of which rises to a cacophony in the intimate space before the action begins. They were so close and in such number that when the ‘music’ stopped and the speech started, it felt like the audience was talking, not realising the play had started.

Once adjusted to this overflowing stage full of a cast in costumes of beautifully blended colour tones of browns, you can settle in to enjoy this immensely imaginative and ingenious production. At this point I must salute the costumier for her creations. This is clearly a low budget show, yet the clothes looked convincing and Chartkov’s beautifully tailored blue coat was covetable to say the least.

With the exception of Chartkov, no one has a specific role in this ensemble performance and it would be impossible to pick anyone out as special from this democratic and talented crew.  They are mature young actors yet with enough immaturity to make great comic facial expressions when they are ‘being’ the gallery of paintings and when each get chances to shine as characters.

There are great lyrics in the song about the evil that is passed on with the portrait, ‘when the devil changes hands’, in this very funny and engaging play.

This company deserves a bigger stage to accommodate the array of talent as their current venue felt like they were acting in a living room. It is testimony to their talent that they carried off such a great performance.