A Sentimental Journey – The Story of Doris Day Review 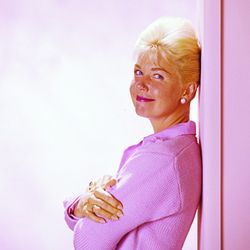 Waiting in a queue for a show is part of the Fringe experience, but being told that the running time is to be 2 hours after a 45 minute wait does not fill your heart with joy, especially with a hungry child as companion. However, it was a pleasant evening and CSoco staff came out regularly to make appeasing noises and one of the Company handed out programmes so before we knew it we were in the plush red seats of the part of CSoco that has the trappings of a traditional theatre, stage and all.

The show tells the story of Doris Day’s life from her childhood in Cincinnati, Ohio,  when she was known as Doris  Kappelhoff ,  to Carmel, California where she lives now. Her costumes of powder blue that featured throughout the show nod to the sweet and innocent image that belonged to this well loved star, but the story shows that the image hid a hard life of single motherhood, wife beating debts, a series of failed marriages and other tragedies.

Sally Hughes who plays Doris Day sympathetically has a good voice but lacks the husky edge that Doris had though she sounded more like her in some songs than others, like Love me or Leave me and Secret Love.

Fifteen of the songs most associated with Doris Day were woven through the story to suit events and it mostly worked although it takes a bit of suspension of disbelief that a German mother would resort to a latin language with Que Sera Sera rather than her mother tongue! That tiny point aside, the songs were nicely blended in to the narrative.

The narrator was Conor Michael Sheridan who played Terry Melcher, Doris Day’s son and at first it seemed his voice wouldn’t carry as he moved, miked up, from the auditorium to the stage but soon warmed up and played a decent part.

There was comedy in the scene where Nick Waring, Tom Sellwood and extraordinarily versatile Elizabeth Elvin dressed as babies and sang the cute and jaunty Pretty Baby.

This was a tight cast that seemed to work well in the variety of roles but for this reviewer, Elvin stole the show as she morphed from character to character becoming every inch the Deutsche Frau singing teacher and equally every inch the vamp in the Move over Darling scene then the baccy chewin' character that is ‘...smelling' like a water melon vine’ in the Calamity Jane scene. This was a high spot as they managed to create the famous Deadwood Stage, a pretty authentic Calam costume then dance the wonderful Golden Garter scene.

The four piece band dressed in white tuxes provided discreet accompaniment to this entertaining and illuminating show that did not last 2 hours after all. My 7 year old companion, already a Doris Day fan, was enthralled.