A Man's a Man Review 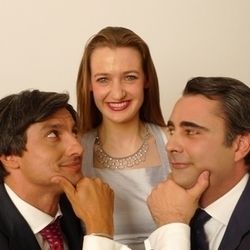 Back to the drawing board for another Scottish/Spanish collaboration. The title ‘A Man’s a Man’  brings memories of the opening of The Scottish Parliament building at Holyrood created by Spanish Architect Enric Mirrales and completed by his Scottish partners.

In that case it was the Burns song ‘a Mans a Man for a’ that’ sung stirringly by Sheena Wellington that is remembered long after this show. The parliament building gets mixed reviews and I suspect this show being premiered in Edinburgh will suffer a similar fate.

Like Mirrales’ design there are elements of the show to admire and the brand new music sounds quite good. Sadly, the opening song lyrics and many of the others are difficult to hear due to the level of the accompanying music. An investment in radio mics would have ensured that those nearer the back would have heard the words which helped carry the story.

Set in Madrid, Emma is despairing of finding the right man after a series of disastrous dates. As a result of going along with her flat-mate to volunteer she meets a wheelchair bound man who turns out to be a theatre director. Emma has aspirations to be a leading lady and finds herself cast in that role in the Director’s new musical.

A love intrigue of Shakespearian proportions then is played out with Emma trying to play cupid for other cast members. This section of the production is when the dialogue is at its best. Eventually, Emma finds love overcoming her reluctance to act on her instincts and the lack of self-worth in terms of love felt by the wheelchair-bound director who in every other respects is a talented and active person. In concept terms, the show has merit and the outcome carries an obvious and valuable message; see the person and not the chair.

The cast sing well and the dialogue in the main is delivered crisply, but this show needed ‘a critical friend’ before getting to this stage.

The show started late and the opening number lacked volume and impact. The set changes are modest but there were long pauses between scenes—over 20+ secs in some cases.  A successful show has to get the audience to care about the fate of the characters, but I do not think that bond was ever created.

The venue complete with pillars masks the cast at certain points with one important song sung by Emma with her face out of sight of some of the audience. The show needs to be longer, more time taken over building the characterisations, and the whole production needs to be delivered with pace.