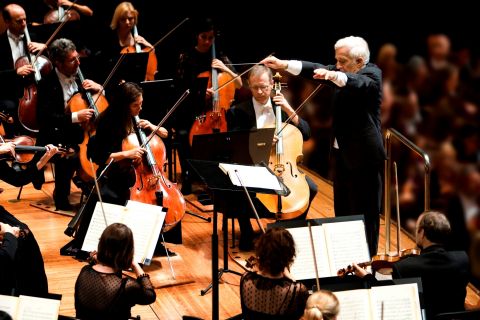 The second concert by the Sydney Symphony Orchestra at this year’s Edinburgh International Festival ended up as somewhat disappointing, more from the choice of programme than in actual performance.

The evening started well enough with an excellent performance of a seldom-heard Sibelius work. Rakastrava, a picture in sound, utilised only strings and percussion, who performed with a sensitivity and restraint that boded well for the remainder of the programme.

It was not to be.

In the succeeding item, Ravel’s Piano Concert in G, Pianist Helen Grimaud appeared completely absorbed in the music, leaning back at times with a look almost of rapture on her face. Technically difficult, with swift changes of rhythm and obvious jazz influences, interchanges with bassoons and trumpet were perfectly timed. And the intervening horn solo deserved its accolade from conductor Vladimir Ashkenazy.

The applause was enthusiastic. But many music lovers – particularly those who had heard the same performers in the same piece at the BBC Proms a week earlier – were disappointed by a an uneven performance that failed to reach top level.

There was neither sensitivity nor restraint in the first work after the interval, Energy by the Australian composer Matthew Hindson.

“For Energy, read Noise,” one member of the audience said. The volume of sound from the orchestra and its large percussion set-up in particular was overpowering. Hindson, who left his seat in the stalls to take three “curtain calls” just below the platform, claims his work is based on Einstein’s Theory of Relativity and that it will be part of a symphony he is writing.

Hearing it for the first time, it was difficult to detect any theme or recurrent phrases other than a powerful sound. One well-known critic later lamented the prevalence of percussion in works by present-day composers. “Talking to Macmillan,” he said, “I suggested he should pledge to avoid percussion for five years.”

The real problem with the concert however was an unbalanced programme where the main items had already been performed at the Proms.

The final work, Strauss’s Rosenkavalier Suite, paid lip service to the opera but came across as a rather schmaltzy pastiche of some of its best tunes. The Waltzy theme was badly juxtaposed to a tender duet.

Ashkenazy gave the orchestra leeway to let rip. His bodily gestures and movements encouraged them when restraint was more appropriate.