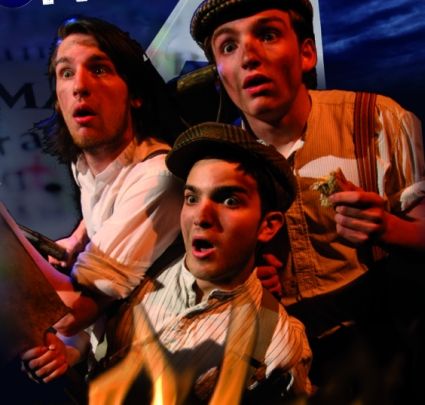 It pays to read EdinburghGuide reviews.  Had I looked at those of previous Young Pleasance shows I could have anticipated a treat.  As it was, I picked it from the Fringe programme risking that it might be a bit of froth with four blokes digging a hole for themselves.

Thank God I didn't miss this all-singing, all-dancing blitz of a show with a cast of thousands.  It's a very silly Second World War spin on Orphic Myth, which sees a family of grave diggers hit the beaches of Northern France and tunnel their way to hell and back.

Rather more taken with librarian Ethel than the Greek myth she dispenses, the somewhat spade obsessed Chippy Wilberforce sets off along side his brothers with a promise to have his book back by Christmas. Our heroes take us through a choreographed war office of singing overworked administrators, a whizzo Biggin Hill airfield and on by train to Dunkirk, where a nicely staged tableau sequence ticks off a week lost in a debauched absinthe green haze.

The conclusion offers a dollop of homage to the classic Powell and Pressburger film "A Matter of Life and Death" and includes a superb physical set piece with Spitfires and parachutes, which has the audience applauding both its sheer inventiveness and slick execution.

Written by Tim Norton with music and lyrics by Ned Bennett (the team behind previous 5-star hits), it's a piece that gives the cast all the ammunition they need and they don't put a foot wrong.   The impressive set makes good use of the space and lighting, sound, costume and choreography are all spot on.  Ok, it's all deeply daft and a bit predictable, but while you can see some of the lines coming they are delivered in slices as fresh as the Battenburg cake that waits for our plucky boys back in Blighty.