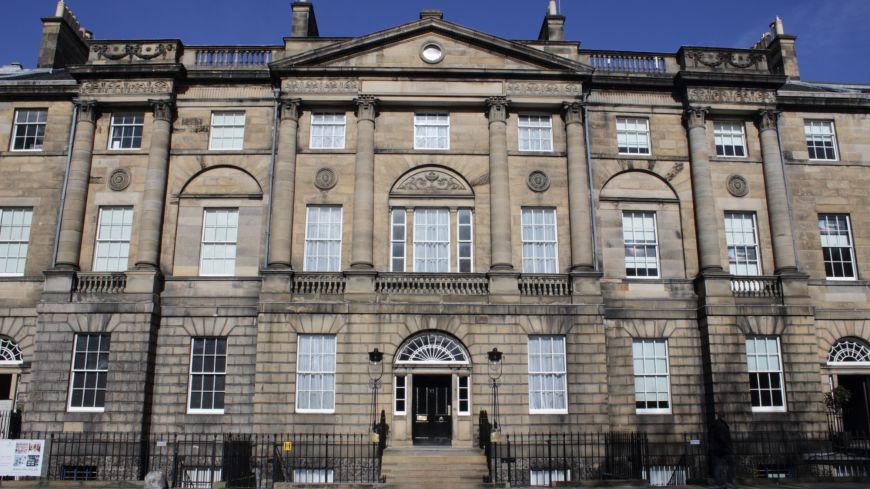 Bute House has been the official residence of the First Minister of Scotland since 1999. Located at No.6 Charlotte Square - the north side of the square - it is reckoned to be one of the finest examples of Georgian architecture in Edinburgh.

It is next door to the Georgian House, No 7 Charlotte Square, a public museum run by the National Trust for Scotland. Bute House is distinguised from the outside by its four pilasters under a central pediment.

The drawing room is used for welcome visiting dignitaries to Scotland, for press conferences and Ministerial receptions. The Dining Room is used for more formal occasions such as state dinners.

The house was sold again in 1816 and a little over a century later, having changed hands several times, it became the property of the 4 th Marquess of Bute. In 1966, the house, together with Nos 5 and 7, was conveyed to the National Trust for Scotland in lieu of duty on the estate of the 5 th Marquess who had died in 1956.

Bute House is unusual in Robert Adam's design for Charlotte Square in having a central front door. The present entrance hall was designed in 1923 by the architect Balfour Paul for the 4th Marquess. It is in the Adam Revival style with a central chimney piece in white marble and elaborate stucco decorations. It forms a small lobby leading to the staircase.
More details in the Bute House guidebook

Bute House staircaseThe cantilevered stone steps would normally stop at the second or bedroom floor, with a cupboard-like arrangement of wooden stairs continuing to the attics. The uppermost flight at Bute House was probably added in 1889 by the architect Thomas Leadbetter, at the request of Sir Mitchell Thomas of Cammo, a Lord Provost of Edinburgh who wanted a billiard room on the top floor to take advantage of the spectacular views to the Firth of Forth. The staircase dome with its festoons of decorative plasterwork may be original.

The plasterwork of the ceiling is original. Its geometrical design and neo-classical ornament are a restrained version of Adam's own ceiling designs, but with the lightness of touch and delicacy that characterises the styles of the 1790s.

Portrait of 3rd Earl of ButeIn 1923, new single doors in the Adam style replaced the double doors that once joined this room with what is now the Cabinet room. A new chimney-piece with a central tablet depicting Venus and Cupid and vases echoing the frieze was also installed. The continental glass chandelier is one of three Bute family pieces now in the care of the National Trust for Scotland.

The full-length portrait on the north wall was painted by the artist Allan Ramsay and shows John Stuart, 3rd Earl of Bute (1713-1792), the first Scottish-born British Prime Minister.

Originally a library or private study, this room now hosts regular meetings of the Scottish Ministers.

This room retains its original late Georgian cornice but is otherwise a recreation by the 4 th Marquess in 1923 when the sideboard recess was formed. In 1966 the Bute House Trustees commissioned the suite of reproduction mahogany ladderback dining chairs which are based on the 18 th century originals at Penicuik House.

The dining table was designed to match these and suits the narrow proportions of the room. The mirror over the fireplace was made for the Drawing Room at Duff House in Banffshire circa 1760 and is attributed to a cabinet maker called Mackie, then established in London, but who may have had family connections in the north-east of Scotland.

The Millennium Collection of modern silver, which is often displayed in the room, was commissioned in 1999 to promote the quality of Scottish craftmanship. It was fashioned by 15 of the country's top silversmiths to coincide with the return of a Parliament to Scotland after 300 years and was presented in June 2001. It is on permanent loan to the First Minister.

Bute House also has a private study, offices, kitchens and overnight accommodation elsewhere in the building.