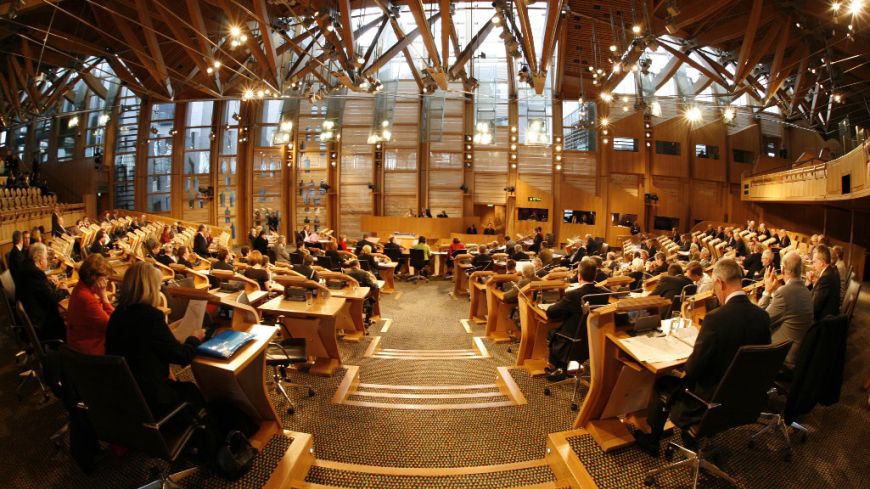 "The Scottish parliament, adjourned on the 25th day of March, 1707, is hereby reconvened."

Completed three years late, and some £390 million over budget, the Scottish Parliament was finally opened by the queen on 9 October 2004.

Comprising of several buildings and an extensive garden area, the Parliament is located at the foot of the Royal Mile, on the edge of Holyrood Park (the Parliament is often referred to as "Holyrood").

The building houses 129 MSPs (Members of the Scottish Parliament) and more than 1,000 staff and civil servants.

The first meeting of the new Scottish Parliament took place on 12th May 1999, years before the opening of the building itself. During the construction of the Holyrood building, parliamentry business was conducted at the General Assembly Hall of the Church of Scotland.

The devolved Scottish parliament building has been surrounded by controversy from the 1990s when the building was being planned. It wasn't just the cost, although many argued why construct a new building when an existing building such as the Royal High School would have provided a suitably dignified and historic setting for the new legislature. The symbolism of the chosen location, next door to the Queen's Scottish residence Holyrood House was not lost on some nationalists.

But the most polarising aspect of the new building has been the modernist "upturned boat" design that was originally conceived by the Catalan architect, Enric Miralles and eventually completed by a team, aided by his wife, after Miralles sudden death during the prolonged construction.

Critics and academics have praised the Miralles design for the bold and imaginative vision of the building which Miralles said "should arise from the sloping base of Arthur's Seat and arrive into the city almost surging out of the rock." In 2005, the Parliament building won the prestigious Stirling Prize, issued by the Royal Institute of British Architects. Catherine Slessor, writing in the Architectural Review, admired this "Celtic-catalan cocktail" for "energetically mining a new seam of National Romanticism refined and reinterpreted for the twenty-first century."

However, rank and file members of the public have been less impressed and unsure of what to make of the building's eclectic and bizarre design. The fact that the construction costs were allowed to overrun so massively, a point that the Fraser Enquiry, which investigated the fiasco in 2004, said "beggars belief," has not helped people open their hearts and minds to Miralles's original concept.

There is much to admire as well though. The hi-tech debating chamber with its vast, open 100 foot ceiling is particularly impressive. The unusual contours of the exterior of the building and garden are eye-catching from a short distance. Or looking down from the slopes of Arthur's Seat you can appreciate how the building merges with other city landmarks such as Calton Hill. The upturned boat design of the roof is a remarkable piece of architectural whimsy when viewed from the air. There are small, historical touches like the incorporation of a lintel from the former 1707 building, the Arniston Stone, into the new building and quotations inscribed into the stonework that offer further talking points.

It may take years, even generations, for Scots to accept this Celtic-Catalan enigma on its own eccentric terms. But you don't have to like it all to make it worth a visit.