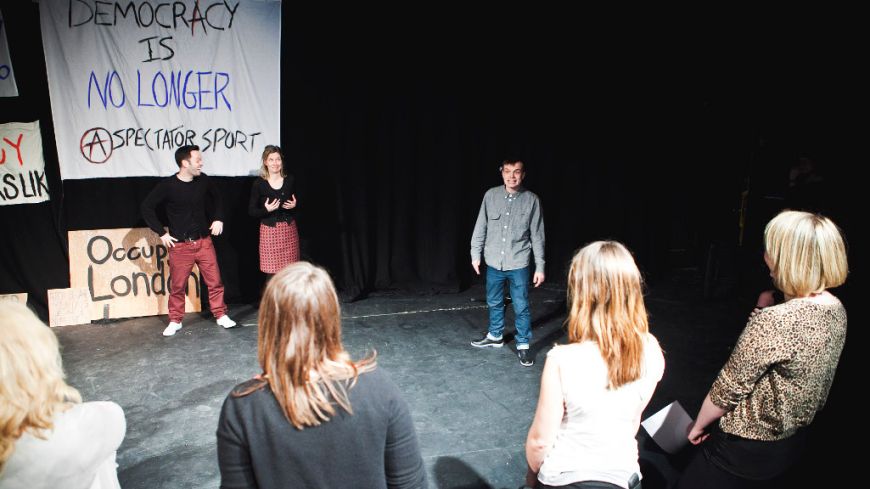 There is a routine that follows me around on nights such as tonight and, if you'd be so gracious as to allow me to elaborate briefly, I'll explain what what I mean.

I generally arrive at the theatre, or whatever particular venue is providing the attraction that day/night, around thirty minutes before the fun (?) is due to begin. Glide over to, hopefully, a silent bar, order a large glass (though more likely a plastic cup) of the house red and spend the remainder of this time picking and scanning over the program for the forthcoming event.

Tonight, however, was another night entirely and two words hypnotically shone out, as if written from Lucifer's pen, that brought my entire evening into disarry. Those words were, of course, "Audience Participation".

Now this, you would think, would be optional, especially given the potential numbers attending. There is no way that everybody could, should or would be directly involved and so the option would be available to just kick back and enjoy the unfolding drama. Right?

Afraid not. Not only is it mandatory that you participate, but we will also give you each your own lines that you have to say, whether you believe them or not.

Oh... did I mention that this show is all about democracy?

The whole experience, which lasts for approximately two hours, is basically a reading of proceedings of an Occupy General Assembly at St Pauls Cathedral in London on 13th December, 2011, and a Q&A session with the Prime Minister in the House of Commons a day later. A kind of compare and contrast exercise, if you like. What is the best kind of democracy?

After a brief warm up consisting of tongue twisting limericks and a bit of "shakey, shakey", we were greeted with a rousing cheer of approval from the professionals, followed by our scripts (though strangely, after carefully going through my bundle of papers two or three times, it became apparent that I didn’t, in fact, have any lines. When I, perhaps foolishly, enquired about this, it turned out that they had made a slight error in judgement and that I would not be able to take part after all. I must say, I found it quite difficult to battle a wry smile at the apparent irony).

The readings were fine as far as readings go, if seemingly effortless in their predictability. It was quietly understood that we were all in for something quite different on this night and it was hard to ignore the buzz of anticipation that tickled our faces beforehand. But it all fell morosely flat. Same old nothing.

The most entertaining part of the evening was the Prime Minister's Questions session. We got divided into Labour and Conservative (Sorry…ConDems) and sat opposite each other shouting and grunting through the entire proceedings (Incidently, there was no choice as to what side you wanted to be on or if you wanted to be on either at all. Of course, this would have been practically challenging to say the least, but would have added a little something to this so called experiment).

Everybody was very agreeable and seemed to know what should and shouldn’t be done and, with that the show did, in fact, manage to find some common ground with mainstream Party Politics in this country. It was boring, unintelligent, unimaginative and uninspiring.

We’re always attacking politicians. "Politicians suck!". It’s something you almost have to say. "They’re corrupt liars! They suck!" Where do you think they come from? They don’t fall from some divine, all knowing place in the sky. They don’t walk through some mystical dimension from the planet Zork. No. They come from British parents, British families, from British homes, they go to British schools, British Universities, British businesses and are voted into office by the British public.

Maybe something else sucks around here.