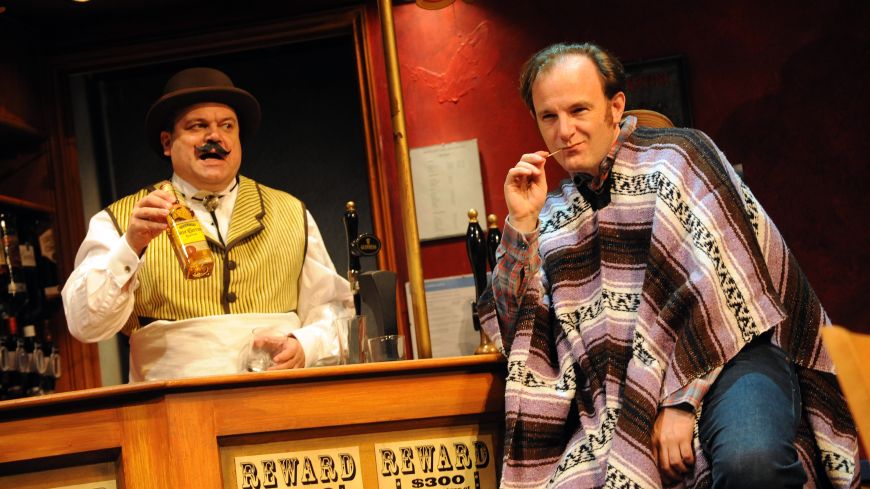 As retailers say, if you love line-dancing and Country & Western music, then you will like ‘Rhinestone Mondays’. Conversely, the show is probably not for you!

Set in the failing Warbleswick Social Club, a small band of line dancers who could go under the title of the Monday Misfits gather to hone their skills under the tutelage of ‘Annie’ played by Faye Tozer, formerly of Steps.

The dancers include a man who thinks he is like Clint Eastwood (Phil Pritchard); a naive, slightly goofy young woman, Carol (Ally Holmes); an older lady with some medical conditions, Mary (Pauline Fleming); the stereotypical gay man, Duncan (Ian H. Watkins, also formerly of Steps); and Tom a shy divorcee who is not into dancing played by Anthony Topham.

The well known Lynn Paul plays the part of Sophie to make up the main cast. Shaun Williamson from ‘Eastenders’ is the headliner as the desperate bar steward trying to drum up trade while taking a vicarious interest in Tom’s love life and matching him up with Annie.

In a sentence, it is a tale of life, love, and line-dancing, with the bonus of some C & W songs that can be described as standards.

However, it would be wrong to describe the show as a juke-box, as there is more dialogue than might have been expected. The play aspect could be described as light comedy with one-liners drawing ripples of laughter from an audience who seemed ready to enjoy themselves.

The music is provided by a soundtrack which for me always takes the production into a lower league. The singing was good on the well-known numbers, but less so on others.

Lynn Paul has lost nothing of the richness in her voice and her rendering of ‘Crazy’ was a highlight.

The characterisations were all very good and there were some amusing moments. The ingredients for a good show were all there, but somehow this production did not seem to click in a big theatre with the cast set back from the front of the stage.

Lines delivered with aggression lost some of the subtlety that light comedy benefits from. Many of the audience bought into the on/off relationship between Tom and Annie and hoped for a happy ending but I was not convinced that the pairing engendered the necessary warmth.

Prior to the closing scene, there is an opportunity for people to get up to dance which was met with great enthusiasm by many, if not all, of the audience.

While this show marks a welcome return to musicals at the Festival theatre, remember a rhinestone is used to imitate a real diamond.