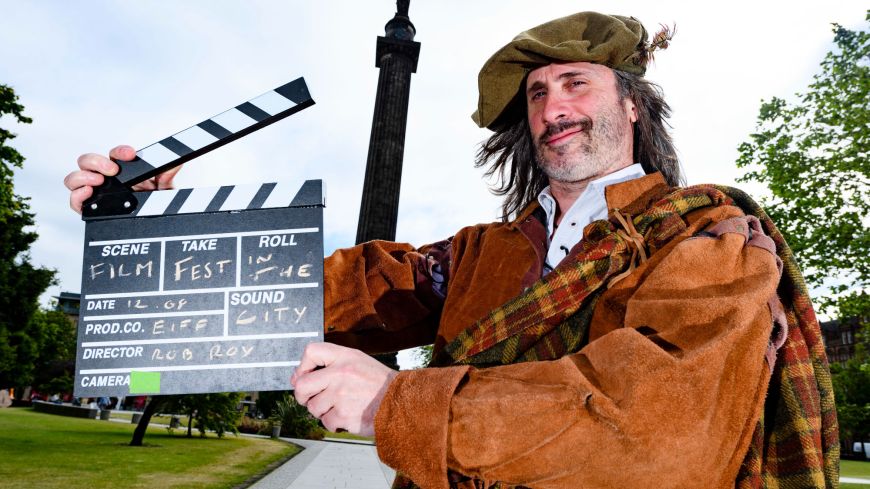 The Edinburgh International Film Festival has announced the programme for the 3-day, outdoor Film Fest in the City in St Andrew Square Garden. The programme runs from Friday 12th to Sunday 14th August.

Taking its cue from this year's festival theme of Scotland’s Stories on Screen, the programme was launched by a kilted "Rob Roy" highlander. Rob Roy is one of this year's films screening on Saturday - the 1922 version, marking its 100th anniversary, rather than the 1995 version which screened at EIFF in that year.

Film Fest in the City on Friday opens with films based on books including Paddington and Fantastic Mr Fox. Friday  will also feature a short film with a Scottish connection, screened before each feature.

Where in the past a week-long Film Fest in the City was held in the run-up to the main festival, this year's 3-day,  open-air programme of screenings takes place at the same time as the main EIFF programme. It reflects the growing footprint of the Film Festival in the St James Quarter area of town, with a strong presence at both the East and West ends of the New Town.

The Film Fest in the City 2022 programme

Everyone’s favourite bear in his first big screen adventure as he travels from deepest darkest Peru to London to try and find himself a new home.

Perth-born Hollywood actor Ewan McGregor stars as a now-grown-up Christopher Robin who is visited by Winnie the Pooh to help find his lost friends in the Hundred Acre Wood.

Neville is Magnus' best friend. Neville can't die. This is going to be AMAZING. A short film from an Edinburgh filmmaker who recently directed the last ever episode of tv series Shetland. In celebration of Scotland’s Stories on Screen.

A world-renowned, professional fly killer, named Carl, is on the cusp of finalising his latest and most powerful invention… an exciting new short film from an emerging Scottish filmmaker and animator.

In celebration of Scotland’s Stories on Screen.

One of the greatest cinematic experiences of all time. Stanley Kubrick’s journey into space is designed for the big screen.

Follow Princess Merida as she forges her own path in Disney and Pixar’s journey into the mythical Scottish kingdom of DunBroch. Celebrating Scotland’s Stories on Screen. Pre-screening family entertainment, including face-painting.

A small bird with a fear of flying tries to avoid heading South for the winter. A short animation which screened at EIFF in 2013. Celebrating Scotland’s Stories on Screen.

Based on the story by Jacques Tati, this beautifully animated tale tells of a French illusionist who travels to Scotland, where he meets a young woman where their exciting adventures together change both their lives forever. Celebrating Scotland’s Stories on Screen. Pre-screening family entertainment.

A pampered gentleman's seamlessly automated life is thrown into chaos when he pursues a free-spirited woman, against the advice of his robot butler. Scottish Film Talent Network-funded Scottish animation from the team at Once Were Farmers. Celebrating Scotland’s Stories on Screen.

Join us for a special live musical performance to accompany this impressive 1922 classic film.

An all singing, all dancing modern classic from Pixar.

Join a whole host of fairy tale characters in this animated, tuneful and funny animated adventure.

Tom Hanks reconnects with his youth in this 80s family classic.

Get your skates on and join Babe Ruthless and the roller-derby team in this funny and quirky drama.

More on the Edinburgh Film Festival