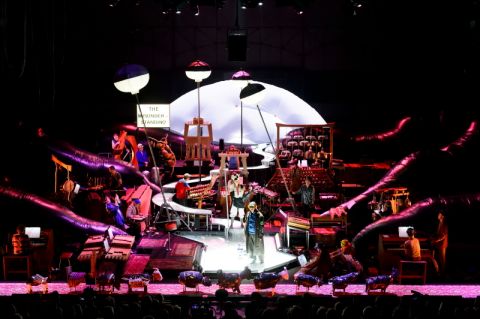 The stage looked a spectacular. Packed full, and banked up with an array of musical instruments twenty seven of which had been designed by the composer Harry Partch who wrote this piece for the largest assembly of his custom-made instruments, specifically designed for his original system of micro-tonality.

Partch died in 1974 but the instruments had to be reconstructed because the originals are in the Harry Partch Institute in New Jersey. Thomas Meixner, the instrument maker, was commissioned by Ensemble Musikfabrik to do this complex work of reconstructing the microtonal instruments.

The stage play, a music-theatre piece in two acts, was directed by Heiner Goebbels and had a huge cast – twenty-one in total. With the volume of instruments and number of people involved one anticipated a thrilling event. Sadly though, this didn’t come to fruition. Despite the range of instruments the score didn’t allow anyone to display their musical talents, no distinctive melody emerged, just a series of atonal, discordant sounds. There was much activity throughout but no cohesive story.

The show was divided into episodes highlighted on a storyboard at the back of the stage such as ‘A Lost Boy’ and the final one: ‘Time for Fun Together’. It had potential but every time a dramatic moment occurred it never gathered momentum. Even the choral singing in the score didn’t make full use of the voices –it was a drone. Obviously a lot of work had been put into the production but the outcome was disappointing.