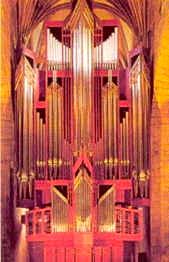 I never thought I would see three of Edinburgh’s well known organists playing The Stars and Stripes Together by John Sousa - six handed! This was the way the late Sunday night organ recital ended, and very exciting it was.

It was then that all three were at the organ’s keyboard. I don’t know if they, or the audience, were more thrilled. The 1992 Rieger organ was put through its paces and it was great fun. It really was.