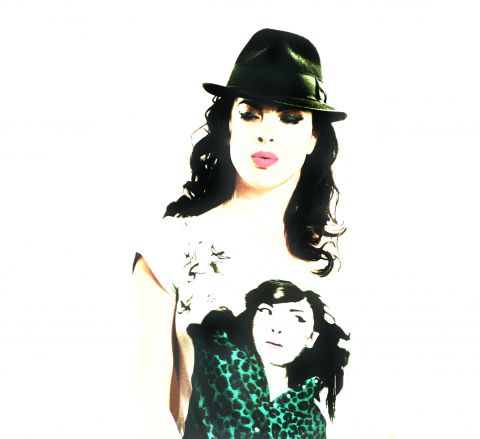 The stage is littered with dustbin lids and childish detritus.  Glittery dresses hang from the rafters and bare lightbulbs pierce the gloom.  It resembles a junkyard crossed with a dressing-up closet for a little girl lost in a David Lynch world.  Black clad men enter and move to their instruments and are silently followed by a small woman clad in a black lace shroud, holding a candle in her cupped hands like some mournful widow of the dispossessed.

Camille O’Sullivan has made a name for herself in newly rejuvenated cabaret circles, injecting just the mildest hint of burlesque into her routines while singing the eternal words of Piaf and Brel.  For her new Chameleon show, playing for a nearly non-stop three week residency at this years Fringe, she is delving into slightly more recent classic songwriters.

Chameleon is appropriately named, as Camille uses these songs, and their stories and characters, as an onstage shielding device, leaving us to wonder who or what she really is.  So, while we begin with the ominous doom-laden storm of Nick Cave’s Oh, My Lord, in which Camille rages with dark-eyed fury at a God who has deserted us (“How have I offended thee?, Wrap your tender arms around me,”), it isn’t long before her black lace hood is cast off and she rips into David Bowie’s Cracked Actor, that monumental Alladin Sane elegy to a faded film star’s sex and drugs and impotent ego-fuelled meltdown.

Camille prances around the stage like a demented dervish, classic song after classic song going by as each number demands a further re-adjusting reduction of her outfit (going by the amount of layers she sheds, she must have been boiling hot for the opening numbers).  Each song has a different visual element and outfit; softly swinging on a bejewelled perch while singing Tom Waits’ lullaby-like All The World Is Green or dismembering a boxful of whistles and bojangles to deliver the same songwriter’s God’s Away on Business as proper old-fashioned Weimar-republic cabaret stomp.

The audience adore Camille and she is certainly a pure nugget of dark showbusiness, easily endowed with incredible charisma and crackling voice.  But I can’t help feeling that it’s all ultimately artifice, as the tradition of cabaret perhaps dictates.  Even as a barefoot Camille sings herself nakedly hoarse on Jacques Brel’s ultimate doomed and decadent lament of Port of Amsterdam, to an avalanche of rapturous applause, it feels like a calculated performance, whereas the likes of Cave, Waits and Brel fully inhabit their songs to the point of utter believability.  The between song “you-don’t-have-to-be-mad-to-perform-here-but…” style banter also sticks out somewhat, and I’m sure Jacques Brel never thanked his promotional team onstage.  I long for Camille to fully let rip, to shred herself bare and genuinely TERRIFY us with some real blood-letting.

But still, she has the crowd eating out of her hand from the very moment she appears until taking the band off one by one and hand in hand at the end.  It is hard not to love Camille, our favourite little doom-struck girl, as she gazes up at the glitterball lights and sings Leonard Cohen’s lines about there being “ … a crack in everything, that’s how the light gets in..”.  But ultimately, as with all performance, the pretence is just a grand illusion.