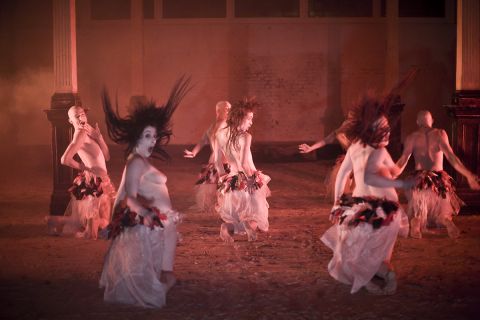 It's not every day that you see almost completely naked performers pull pieces of chocolate out from between their pants and crotch and offer this not quite so tempting where-have-they-been-morsels to a reluctant audience only then to chew them into bits and spray the resulting mess over the front row. This is one of two unexpected confrontations the audience briefly endures in this extraordinary spectacle that Zen Zen Zo have concoted.

A cross between dance, physical theatre, comedy and mime, this small troupe of Ozzy performers have been wowing audiences back in their homeland and to packed late night crowds here at the Fringe.

As you come into the venue one seems to be in an artificial mist and gloaming and as you take your seat their bodies are already naked and curled up on stage. They eventually slowly unfurl into carefully choreographed Butoh-esque movements with frozen screams on their faces but eventually get more joyful and manic, animatedly reaching out with flailing desperate hands like deranged vampires in need of another blood fuelled fix. At one point they shimmer as one, an undulating mass of flesh and they reminded me of the creatures that haunt the video game Silent Hill or the shaking undead in I Am Legend.

Although a few moments have these macabre and twisted touches, much of it morphs into more traditional and classical set pieces before becoming truly absurd and comic with the flaunting of high heels, floral wreaths and sunglasses in a very camp send-up of some of the more ridiculous physical motions and sounds that we humans pass off as communication.

The first three quarters of the show seem to be based on the life cycle as we get passages of time referencing birth, infancy, midlife, old age and death. The old age sequence was especially powerful and highlights the real strength of the performers for this scene and quite a few others involving slow motion movements towards the audience with hands reaching out in futile desperation showed that stillness is often just as impressive, if not more so than leaping around acrobatically.

After the life cycle we have what I imagined to be the Zeitgeist movements that may have represented rebirth and seemed to deal with joy, success, war, sex and so on. Of course, this is just my interpretation and I'm sure it's meant to be viewed in a more general and open way.

But there's two elements I haven't given credit for that are at least 50% of the experience: the lighting and the music are what really make this. Throughout is a loud thumping soundtrack of world music, ambient electronica and pop tunes and it's the co-ordinated timing of sudden movements to the beats that really impressed upon my consciousness. This combined with the fact that it's a very visual show there were times when I felt like I was watching a piece 3D cinema.