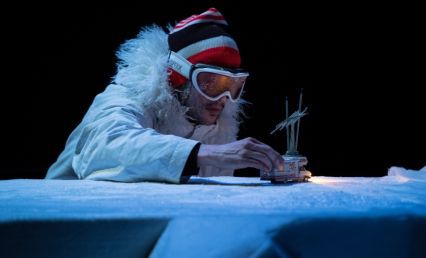 Stretching out in front of a parka clad and beanie hatted figure is a table-top wintry landscape, dotted with pine trees and little settlements of houses, lights glowing warmly.

Down the slope of his arm comes a worn-out little outside broadcast van making its way through the snow storm to the plateau. Heading ever further north beyond signs of civilisation and the tree-line, the houses thin and the vegetation disappears, leaving just a crisp white expanse.

This magic is achieved by the actors folding themselves to become features of the landscape, sinking down to become a hill or revealing a dwelling, complete with smoking chimney, high on the cliff of a raised foot.

With a jump cut we are inside the van with the intrepid film crew, hilariously running out of hands as they drive, act as windscreen wipers, rear-view mirror (complete with Magic Tree) and try to grab coffee, snacks and cigarettes on the move.

Arriving at the polar ice they seem both a bit inept and ill equipped, dropping and tangling equipment before realising that they are stepping on thin ice. With a crack we are plunged into an icy video before coming face to face with a huge polar bear and her cub.

As the sea ice breaks up the threat is not from the great white bear but from the diminishing sea ice.

This short piece is meticulously made using a skilful mix of mime, video, object and puppet theatre to enchanting effect. The companies have plans to develop this into a longer form (late next year) looking at how people will absurdly keep up normal life in the face of climactic chaos.

A charming blend of fact and fiction with a vintage aesthetic and very current message.