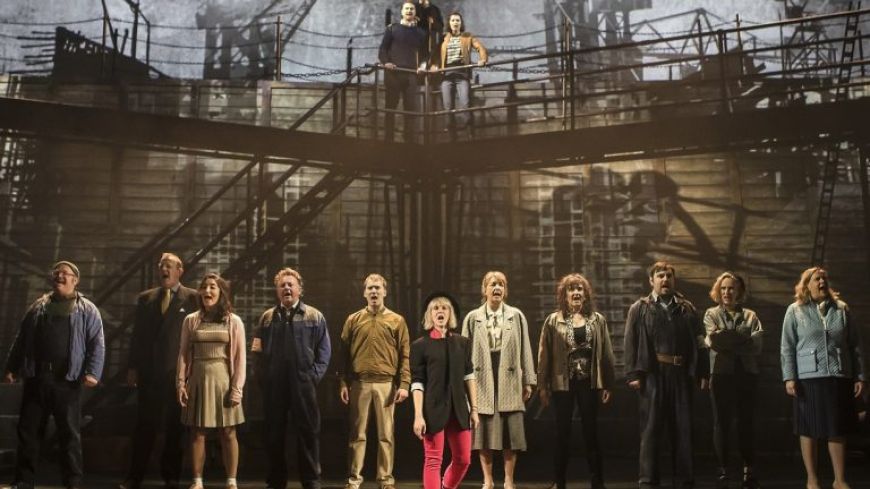 Sea shanties and Celtic folk orchestrate Sting’s inspiring debut musical, The Last Ship, which sings the plight of the working class of Newcastle upon Tyne during the end of the region’s shipbuilding industry. This UK tour polishes the piece up from its original 2014 debut in Chicago, bringing this hometown tribute back to its roots here in Britain.

Taken from his concept album, The Soul Cages, Sting has written a musical about the men and women who built a town's industrial history on their backs. Taking a firm oppositional stance to Thatcher-era economics, the book and lyrics centering around blue-collar hard work and protest hold a Billy Elliot-esque flair, especially as shipyard owner Freddy Newlands warns the workers against “making the same mistake as the miners.”

The central theme of the musical revolves around the ship Utopia, that's not yet complete. The visiting Governmnent Minister, Baroness Tynedale, reveals that the shipyard is to be closed and that they propose to scrap the ship for parts, keeping on a small number of workers for disassembly. The workers are uproarious in their protest.

Simultaneously, Gideon Fletcher has returned to the home he left 17 years ago only to find his high school sweetheart Meg Dawson more than disenchanted by his broken promises of returning. Life in the shipyard was a fate he became a sailor to escape, and now, upon his return, he finds that life and the fabric of this town are crumbling around him as he tries to salvage his relationship with Meg and with the daughter he didn’t know they had.

The throngs of shipbuilders make a chorally-striking thread throughout The Last Ship, the harmonies breathtaking and the songs memorable. The orchestration shines, especially alongside the set design by 59 Productions: projections and vaulted steel-structures take you from ship to sea to star-gazing, at times ominous and at other times beautifully impressive.

There could do with more exposition in order to more closely connect with the characters; the central theme of industry and livelihood makes the character development opportunity a bit stunted, but it doesn’t greatly impact the integrity and purpose of the story. Frances McNamee as Meg is particularly enveloping. Her voice is clear, robust and strong; she offers no throwaway notes or gestures, and you can really feel the weight of her history throughout her story arc when she sings. Richard Fleeshman as Gideon has an intriguing voice: growly and a bit (unsurprisingly) rock; his portrayal of the character is endearing. Joe McGann as shipyard foreman Jackie White is a standout role for this piece, honouring the real men who made and gave their lives to the shipbuilding industry.

It is clear throughout the piece that Gideon and his daughter Ellen are, in part, Sting’s representation of himself. In addition to an homage to his hometown of Wallsend, this piece is also emotional and personal in that it’s a repayment to a town he left for loftier dreams.

The Last Ship is a fitting tribute to Tyneside, even down to the details, like showcasing the real stained glass window of Newcastle’s Cathedral Church of St. Mary’s, which serves to memorialise the industrial history of the city and its people. This story is one of labour, life, and love, and the intersection when all three intertwine.

“You are what you do.” This is uttered many times throughout the musical, nodding to the identity and pride these livelihoods brought to the men and women of the shipyard fighting against the privitisation of their domain. It’s a topical message and a warning against undermining the working people of today, even ending with a statement on protecting the NHS. It’s a story about fighting for something that might be slipping away, even if it seems hopeless. Sting fought for this musical, even hopping in as the foreman for the remainder of a run when the show was failing to break even on Broadway. As quoted in a 2014 interview with the Washington Post, he comments on the show and the commitment to telling this story, “It may be difficult, it may be ugly, but it’s the one I wanted to do.”