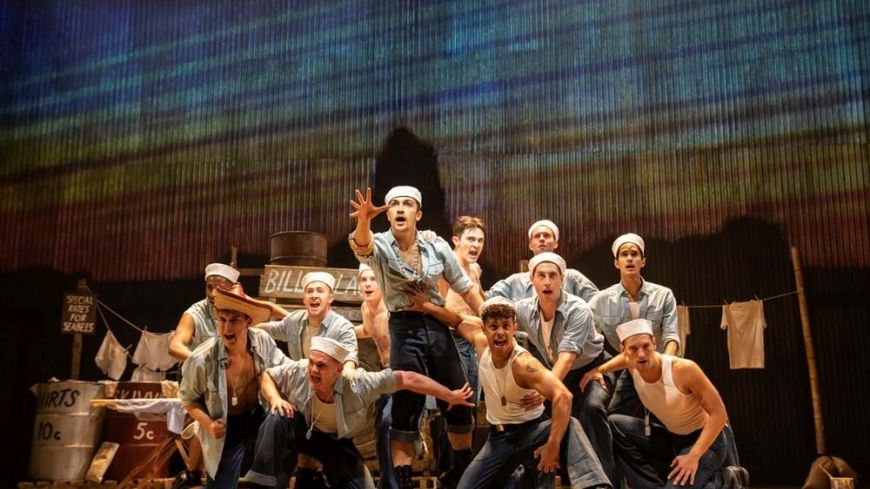 The middle of the Pacific Ocean is far away from home for most people.  Islands shrouded in cloud and mystery, another world with a siren call for fugitives or perhaps those running to see a life outside.

Trouble is looming in paradise as the Japanese forces expand and occupy the Pacific Islands during World War II.

Ensign Nellie Forbush has no idea that people lived like this, she is a hick from the sticks, Little Rock where her mother views her as Arkansas’s answer to Florence Nightingale. It’s a culture shock shared with many of the Marines and Seabees (Construction Battalions {CB’s}) who suddenly descend on the lush isles.

Nellie a cockeyed optimist, as corny as Kansas in August, as normal as blueberry pie, is swept off her feet by the lifestyle of cultured Frenchman Emile de Becque, as different as different can be. Having met him one enchanted evening she already thinks he is wonderful guy. But he has a shadowy past that both she and the American military need to come to terms with. The outcome and his work with the young Lieutenant Cable might or might not turn the tide of war but is sure to be dangerous.

The story sees the characters at war with the themes of romance, obligation, and prejudice.  While not every part feels fully fleshed out or emotionally engaged the result is ravishing.

Of course, all the crowd-pleasing songs (like A Cockeyed Optimist, Some Enchanted Evening, There is Nothin’ Like a Dame, Bali Ha’i, I’m Gonna Wash that Man Right Outa My Hair, I’m in Love with a Wonderful Guy) are there and are carried off with musical flair.  “Happy Talk” is given a little desperate and ominous quality which adds greatly. For the shows launch in 1949 “You’ve Got to Be Carefully Taught” was progressive and comes at a point that now provokes an audible intake of breath.

This production proves that with careful handling not only can it age well it can also feel fresh and relevant. It is surprisingly perceptive on several fronts; how American home comforts changed the aspirations of local peoples; the racial tensions and culture shock on the segregated forces, not to mention centuries of colonialism.

It’s good looking too. Set within a stark corrugated iron hanger, the rear in the ragged shape of a silhouetted volcanic island, sometimes washed with evocative projected palm trees and colour.  The action turns effortlessly (and it really does revolve) centre stage where the large and strong cast, with the leads delivering charming performances, all assisted by a great orchestra, provide a spectacular production.

If you are looking for an escape it might be your own special island.