Oscar, (A Play, A Pie and a Pint), Traverse Theatre, Review 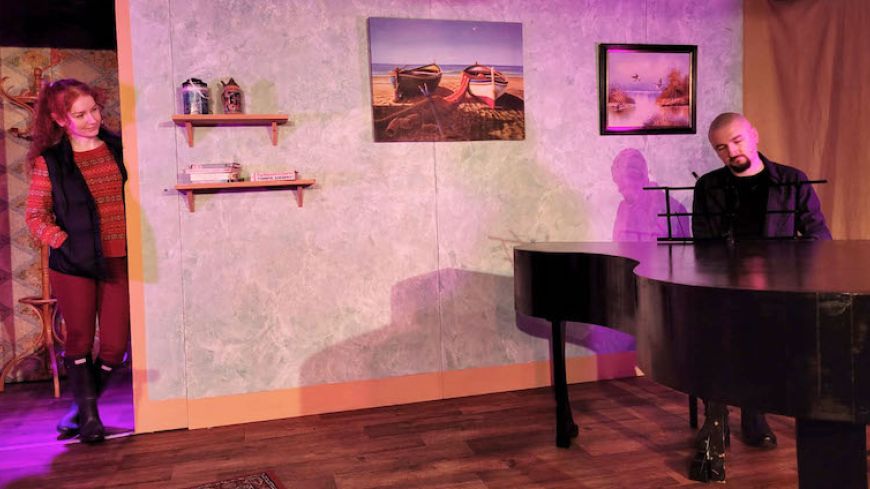 A few classic numbers from Frank Sinatra on the soundtrack sets the scene with the stage all set - paintings of boats and birds on the wall, bookshelf, (William Boyd, Laurence Durrell) and a grand piano in the lounge of a cosy cottage on a Scottish island.  In a prelude song, Oscar, suitcase in hand, explains that he here on a retreat for two weeks, seeking space, peace and quiet to compose a musical tribute for his late brother, Freddie.

He is greeted by Miriam, the vivacious, red-haired landlady, busy polishing his piano (transported up from London) - ‘Don’t touch it!’ is his far from friendly, opening remark. In contrast to his sober, sombre mood, she is bright and bubbly, describing “the serenity of the place,” ironically with a loud shriek.

The storyline is narrated through a well-balanced medley of tight, taut dialogue and heartfelt songs, as they gradually get to know each other.  She is able to empathise with his grief as her father, Frederick, had passed away a few years ago. However, Oscar would prefer a time of solitude rather than Miriam popping in all the time with freshly shot rabbits, new laid eggs or to collect laundry.

This does illustrate their day to day island life, but a clearer shift in lighting to denote morning to night, as well as a few quick and easy costume changes would accentuate the passing of time.

Miriam has not played the piano for a decade, but now has the opportunity to share her love of music with Oscar, a professional composer.  Her father had advised her to live life to the full as you might get run over by a bus tomorrow. ‘But there is only one bus on the island’ she pauses, then adds with a laugh, ‘…so not very likely!  But here she is still living at home with her mother and not following her dreams.

Through their mutual experience of family death, Oscar encourages Miriam to release her feelings, while she inspires Oscar to compose a Requiem on his own without Freddie, but for Freddie.

As accomplished actors, singers and pianists, Brian James O’Sullivan and Kirsty Findlay create a superb double act, and in one fast paced scene, engage in a game of “musical chairs,” taking turns to play a few tunes at the piano.

This is a minimalist Pinteresque drama where two strangers are thrown together, each alone in a fog of loneliness, capturing their personal inner conflict and sense of loss. Oscar is running away while Miriam has been standing still from getting on with their life.  Now on this remote Scottish island, they are able to express their emotions through their passion for music and realise that “Life is daft, life is strange, life is odd, life is change’.