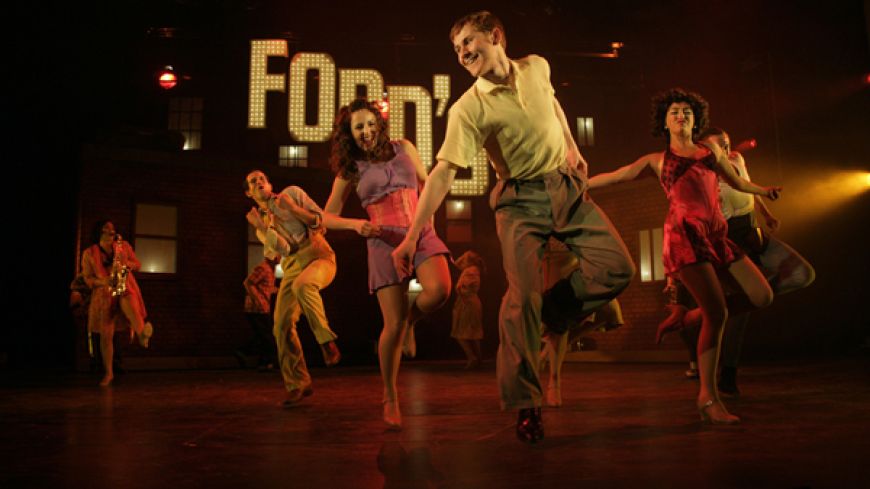 Even if you have never seen Cole Porter’s madcap musical, you are sure to know many of the songs:  the performance opens with the foot tapping, “Another Opening, Another Show”, Act II with “Too Darn Hot”. Blending romantic ballads, dance numbers, jazzy tunes and Operetta, the original 1948 production ran for over 1,000 performances and won a Tony Award for Best Musical.

This is a classic play within a play, where Fred Graham’s touring theatre company is performing a musical version of  Shakespeare’s comedy, “The Taming of The Shrew” in Baltimore. The leading lady happens to be his ex-wife, Lilli Vanessi.  The action moves between scenes from the play (the story of tough-talking feminist Katherine who is in conflict with her father over his plan to find her a husband before her younger sister may marry), and all the drama and dangerous liaisons taking place backstage.

Martine McMenemy plays the two feisty women, Lilli and Katherine who are both, for different reasons, rather  tempermental. Lilli has to cope with working with Fred, (played by the dashingly suave Graham Vick), who takes the role of her suitor, Petruchio. After she finds out that Fred is seducing the younger, pretty actress Lois, it’s a case of Hell has no fury like a woman scorned. As farcical scenes ensue between the duelling couple during a performance, Fred responds with the line "Women should be struck regularly like gongs." (a tribute to Noel Coward from Private Lives).

This is an ambitious and entertaining production where a band of strolling minstrels perform around the stage, many of whom double up as the Shakespeare cast and Theatre actors or crew. Slick scene changes roll on the Stage Door, Dressing rooms or Padua street scenes.

The Ensemble sing and dance with vivacious energy (“Too Darn Hot” is a magical show stopper), and choreographic style (“Brush up your Shakespeare”).  All in all, a fine revival of this warmhearted, witty musical.

Performances at Pitlochry Festival Theatre throughout the summer season until 16th October.