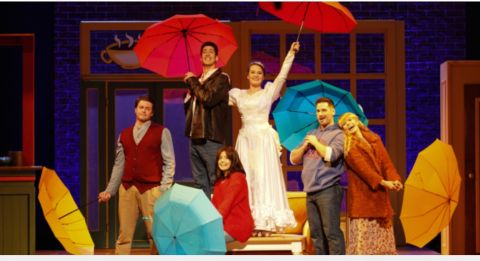 Friendsical is a great excuse for nostalgia over one of the nation’s favourite TV shows. The cast are phenomenal and incredibly convincing. In particular Mitchells (Chandler), Lee-Morgan (Ross) and Goggins (Monica) really sell the part and have the mannerisms down. The set is a gorgeous, brightly coloured haven, featuring both flats and the iconic 'Central Perk'.

The cast burst on stage with their opening number, no longer the infamous theme song but something better. The voices are outstanding, enough to feel like a trip to Broadway. The tunes are catchy and Fox (Joey) gives a standout performance as Chloe, the 'Xerox slut'. The audience gets to indulge in all the classic moments that made the show a hit. And the cast don't hesitate in poking fun at the numerous plot holes.

However, a lot of time was spent convincing us the reason behind squeezing ten years of plot into a short performance. An unnecessary addition, as the audience can accept a little theatrical licence. Gunther made multiple memorable appearances also as a behind-the-scenes crew member which added a great deal of extra comedy moments. This could have been pushed further, for at times, it felt like an unnecessary rehash of old material we have seen multiple times. It would have been interesting to see, perhaps, where the characters are now to add another dynamic to the production.

Overall, a tremendous cast with superb musical comedy. Perfect day out for a Friends fan who loves to relive the iconic series.