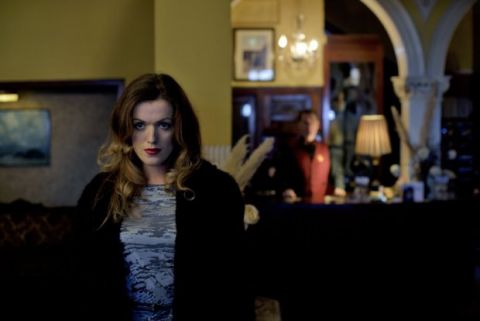 Put Donnacha Dennehy and Enda Walsh in the same space and watch the sparks fly. The combination of two very different yet equally challenging artists was always likely to an interesting one, and ‘The Last Hotel’ does not disappoint.

Dennehy already has a distinguished career as a composer of post-minimalist sympathies willing to examine the rich traditions of Irish music in innovative and exciting ways.

Walsh, the writer of dark comedies such as ‘The New Electric Ballroom’ and ‘The Walworth Farce’, exploring Irishness in all its contradictions, has seemed to this reviewer ready for some time to escape the versions of Stockholm syndrome in which not merely his characters seem trapped.

All that is needed for this conjoining of talents is an almost bare stage, four very different characters with Crash Ensemble to support them. Dennehy and Walsh take us on a meditative journey that encompasses both mortality and history.

Mikel Murfi prepares an anonymous hotel foyer for the arrival of Claudia Boyle, awaiting the arrival of an English couple (Katherine Manley and Robin Adams) who will assist her suicide.

The build is gradual, involving seeming small talk and partial revelation, until the imagined appearance of a group of pensioners causes the man to ponder whether they too would choose to end their lives. During a rehearsal of the intended suicide, the Irish and English women begin to bond, and the banality of the couple’s existence becomes even more apparent. After the woman’s seeming suicide, the hotel is transformed into a karaoke disco, on the floor of which the three principal characters emerge even more clearly, and parallels with the historical and recent past are thrown into sharper focus.

The past and present are always at least in part political, and Dennehy and Walsh do not duck the implications of their work, both the driving score and richly sub-texted libretto inviting us to think through the ethics of assisted dying and the impacts of austerity politics on individual lives and communities.

In such a tightly constructed piece the opportunities and challenges for the cast are considerable, and all four rise to these with their full abilities. Claudia Boyle’s pitch-perfect singing matches her realisation of her role as ‘The Woman’, while Katherine Manley and Robin Adams imbue their characters with a depth equal to those character’s desires. Mikel Mufi’s tremendous presence seems to embody the very eye of the storm around which the passions of the others collide.

Dennehy’s score and Crash Ensemble’s interpretation underscores, in all senses, what we hear and see, a major development in the oeuvre of both writer and composer, and a remarkable achievement by all those involved.