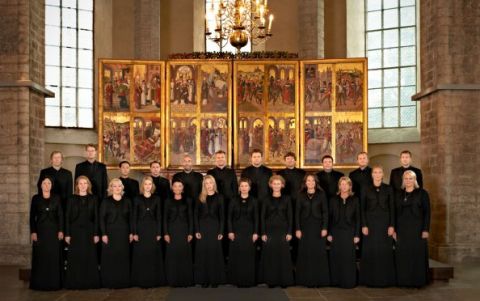 On a Saturday night the Russian Orthodox Church might well be singing the All-Night Vigil in preparation for their Sunday worship. Rachmaninov took nine components of what is often called Vespers and added six of his own, hardly detectable, as they were so similarly crafted. Old Church Slavonic, which we heard, remains the liturgical language to this day.

The twenty seven members of the Estonian Philharmonic Chamber Choir sang a capella, without music accompaniment, organised traditionally as soprano, alto, tenor and bass. But Rachmaninov made it far more sophisticated by sub dividing these groups, not just once but at times in even smaller sub sections. It is this level of difficulty that makes this highly regarded work usually beyond the reach of church and cathedral choirs - making our concert particularly special. Indeed Rachmaninov wrote the work in 1915 for concert performance, but had hoped one of the movements, number 5, be used in his own funeral.

We were hearing one of the most highly regarded performers of Russian Orthodox music under their chief conductor since 2008, Daniel Reuss. And they did not disappoint - far from it, it was magnificent. There were lovely alto and tenor solos, and as the Nunc Dimittis drew to an end, the basses got deeper and deeper to a rarely heard low B flat.

Earlier in the concert we had heard two psalms, 117 and 131, composed by the best-known living Estonian, Arvo Part, followed by Hail to the Virgin Mary, Lord Jesus Christ, son of God, and Our Father by Russian, Alfred Schnittke. Estonian Cyrillus Kreek's three psalms 22, 104 and 1 were exquisite. They can be sung equally well by a large choir or small group.