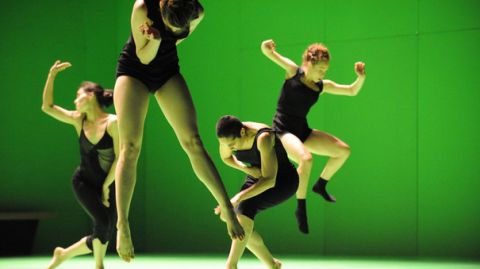 The performance of ‘Hora’ by Israeli dance company, Batsheva, was completely overshadowed by the human rights protesters who, rightly or wrongly, took centre stage this evening.

Outside the Edinburgh Playhouse a group of a hundred or so people were gathered, separated from the theatre-goers by a line of police officers. Most were waving Palestinian flags and holding placards that pleaded, ‘Boycott Israel Sanctions Now’. Leaflets were handed out that depicted a dancer leaping gracefully into the air, arms raised, holding a gun, with the caption ‘Don’t dance with Israeli Apartheid’. There were chants of ‘Don’t, don’t cross this picket. Burn, burn, burn your ticket.’

Alongside this group of protesters were others with banners that read, ‘Scottish Jews for a Just Peace’, this party pressing leaflets into bewildered hands bearing the headline, ‘Culture Unites, Boycotts Divide.’

Only one door to the theatre was open, so that bags could be checked by security on the way in. In the auditorium on every level, security officers stood about, wearing headsets to enable them to communicate with one another. The start of the performance was delayed by some 10 minutes or so amid an uneasy and disturbing atmosphere.

The performance was an hour long and was stopped three times by protesters, two groups appearing in the Dress Circle and the final protest coming from the Stalls. All were chanting, ‘Free, free Palestine’, while the dancers on stage halted, the house lights were raised and the protesters strong-armed out of the building.

Some audience members left, others rose to their feet to applaud the increasingly despondent dancers. This performance unwittingly became less about the dancing, and more an effort in perseverance and endurance – on the part of both audience and artists.

The performance itself held promise: the dancers were choreographed to perform individual motions and manoeuvres, rather than an ensemble piece, which explored a multitude of the possible movements that a human body could make.

Many of the movements didn’t appear human and the music, evoking sci-fi themes, together with the luminous green setting, added to the alien vista. However, it was not possible to either engage with or enjoy this performance. It was also difficult to ascertain how the mood plus interruptions was affecting the performers and the performance they gave.

With high-profile Scottish artists such as Liz Lochhead and Iain Banks, among many others, calling for this troupe to be pulled from the Festival, one could argue that their inclusion was asking for trouble.

The EIF has a duty, to its audience and performers, to behave in a responsible fashion. It is questionable whether inviting a company that is hailed by the Israeli Foreign Ministry as Israel’s, ‘best global ambassadors’, at this particular moment in time, is a responsible act. This performance never had a hope of running smoothly, leaving both audience and artists vulnerable and with a rather nasty taste in the mouth.

The audience were ushered out of the emergency exit doors with the chants from protesters, still outside the building, of ‘Your tickets were covered in Palestinian blood’ ringing in our ears. This was not one of the Edinburgh International Festival’s finest moments.