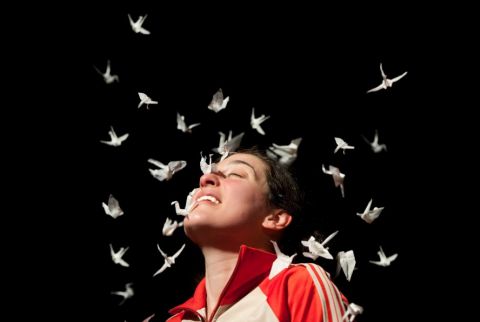 One Thousand  Paper Cranes tells the true story of a young Japanese girl, Sadako Sasaki, who fell down during a sports day in 1955. It transpired that her fall had been caused by radiation sickness ten years after Hiroshima. To try to save her life, Sadako and her best friend decided to make one thousand origami birds as they’d heard the story that whoever can make that magic number of paper cranes can have anything they wish for.

There is a training session in progress between Sadako (Julia Innocenti) and her pal and coach, Chiziko (Rosalind Sydney) as the audience is taking their seats. Tracksuited and full of vim and vigour, the two girl team go through their energetic routine that is backed up with positive thinking, visualisation and focus. It is all the more shocking when this super fit girl, with high Olympic hopes, falls like a wounded bird on the race track with the symbolic sound of fluttering wings in the background as she shifts from extreme wellness and fitness to drained disability.

Rosalind Sydney is a strong presence on stage as her character turns her training programme to origami with a new marathon goal of creating one thousand paper cranes to save her best friend’s life. With both the skill of origami and more than a touch of magic hundreds of the avian creations appear on the stage, each one being given the breath of life.

Like any pilgrimage or act of faith, miracle is in the humanity; the shared action and experience and the giving of hope. In this case, apparent silliness wins over the seriousness of hospital treatment, at least on some level.

This is quality theatre for older children and should be marketed as such. The show appears in the Fringe programme under general theatre, with the proviso that it is suitable for age 8 upwards which reads like guidance rather than making it clear it is a children’s show. For this reviewer, sport is inherently boring and much of the humour was lost on me but certainly not to the rest of the audience.

There was a very selfish mobile call taken during the show by an audience member, but this two-handed cast did not miss a beat despite the ringing and the conversation.

This is a dynamic piece with a positive message for all ages.