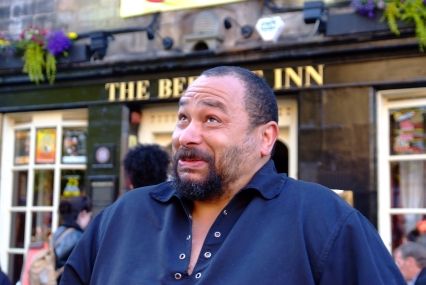 I love Tam O’Shanter. Perhaps not enough to have his name tattooed across my hurdies, but sufficiently to hope that the production of “About Tam O’Shanter” was going to be faithful.

For those who don’t know Tam, perhaps I should explain. Tam O’Shanter is the eponymous hero of an epic poem by Scotland’s national bard, Robert Burns. It features a decent enough man who, like many of us when he goes to the pub forgets that he has a home to go to - that and the fact that his route takes him past a haunted churchyard.

It’s a rollicking tale, a wild ride but we are in the safe hands of Bruce Fummey, “the finest speaker on the Afro-Celtic Burns supper circuit”. He canters up to the subject by telling us a little of his own background, his home in rural Perthshire, his previous day-job as a physics teacher and his experiences of Burns.

Some of this feels slightly like padding but it does allow a genuine rapport to build with the audience. For the main the jokes comes at a gallop and while nearly straying into Mother-in-Law territory the punch lines are fresh and are drawn from a weird and wonderful set of personal observations. His ideas for an intellectual, rather than age-based limit for legal drinking are worthy of consideration by the Scottish Parliament and as to how an Ann Summers party and the circumcision of an Edinburgh rickshaw driver fit in, you will just have to see the show.

Along the way, Fummey gives us a worthwhile background to the writing of the poem in 1790, both in its folkloric roots and the historical figures that it is likely to be based on. He manages this without resorting to classroom techniques, interjecting jokes and keeping the whole thing light and amusing.

He rounds off with both a breathless synopsis and a roaring rendition of the comical Odyssey. For a Tam fan, this is worth the ticket price in itself.

What you have is a enjoyable hour of comedy and verse that does justice to this, Burns’ favourite and most celebrated work. As Tam would say, “the minutes winged their way with pleasure”.

Note: Bruce Fummey is also appearing in My Afro Celtic Angst as part of the Laughing Horse Free Festival. 9-28 August (except 15 and 22) 9.30pm.