A Betrayal of Penguins: Endangered for a Reason Review 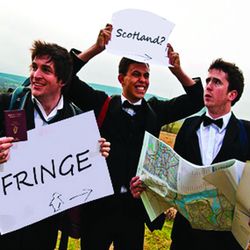 When I reviewed A Betrayal of Penguins' show last year I said that they showed a great deal of potential, but they weren't quite hitting the right notes, giving it three stars, so it was with great interest that I went to see their latest offering "Endangered for a Reason".

I had hoped they were going to pull out all the stops this year and I was very happy to see that they have. Their new show is still recognisably the same witty Irish sketch act, but leaner, more streamlined and much much sharper. The smaller cast this year means the stage is less cluttered and the performers are able to put more physicality into the show.

"Endangered for a Reason" is loosely based around three concurrent events, the Oscars, a horse race and a wedding, which all serve to provide us with a cast of wonderfully colourful characters, from over-zealous caterers to spies moonlighting as racing commentators. The sheer amount of surreal brilliance in the creation of these sketches is impressive, as is the likability of the performers themselves who genuinely look like they're having as much fun as the audience.

The show is jam-packed full of dazzling wit and well-crafted jokes, and even though they still make mistakes, they recover, adlibbing superbly, and no matter what, making the audience laugh. These guys have a great deal of natural talent and its finally getting the outing it deserves in this show.

Even though the show isn't perfect, the performers are so likable and the material so sharp that "Endagered for A Reason" is quite simply irresistably funny. See A Betrayal of Penguins now, before they get the TV show they very rightly deserve.