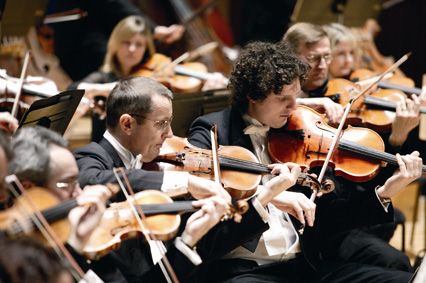 The Philharmonia, regarded by many as Britain’s leading orchestra, was in cracking form on its only appearance at this year’s International Festival, performing a balanced programme of three seminal works from the early years of last century.

The concert opened with Poem of Ecstasy by the Russian composer Scriabin, designed for a very large orchestra with unusual instrumental combinations. It features two harps, a washboard in an extended percussion section, numerous trombones and an organ, in addition ti a full complement of woodwind and strings.

The Philharmonia matched these requirements and just managed to squeeze all the musicians onto the capacious Usher Hall platform.

The composer wrote a long poem extolling his unorthodox beliefs mixing religious fervour and sensuality which was intended to accompany the musical performance and ended with the declaration “I am Ecstasy.” Fortunately this was not on – or in – the Festival programme.

Agile conductor Esa-Pekka Salonen almost danced around his rostrum, conveying instructions to musicians with an expressive left hand while the baton-wielding right controlled tempo. He extracted extremely sensuous passages when needed and an astounding overwhelming volume of sound in the crashing finale.

The other work in the first part of the concert exuded sensuality of an entirely different order.

In Scheherazade, Ravel used a friend’s poems for three songs of mystery, voluptuous thoughts, love, sadness, and disappointment. Mezzo-soprano Kelley O’Connor impressed with her confident voicing of much difficult phrasing, though there some glitches in the higher register.

Rite of Spring, Stravinsky’s third work for Diaghilev’s Ballet Russe, was a powerful climax to the evening. Musically the most innovative and difficult item on the programme, it put the utmost strain on each and every member of the orchestra. Sub-titled Pictures from Pagan Russia, there are snatches of traditional folk song. Gentle bird-songlike passages precede dynamic chords indicating burgeoning natural life while authoritarian outbursts from strident trombones and insistent beats from two timpanists and their six drums stressed the savagery of ancient pagan rituals.

The frenzied full throttle of the final sacrificial Dance of Death filled the hall with amazing sound. There was a moment of stunned silence before the whole audience erupted into prolonged, repeated applause, cheers and shouts.

Certainly an evening to remember.